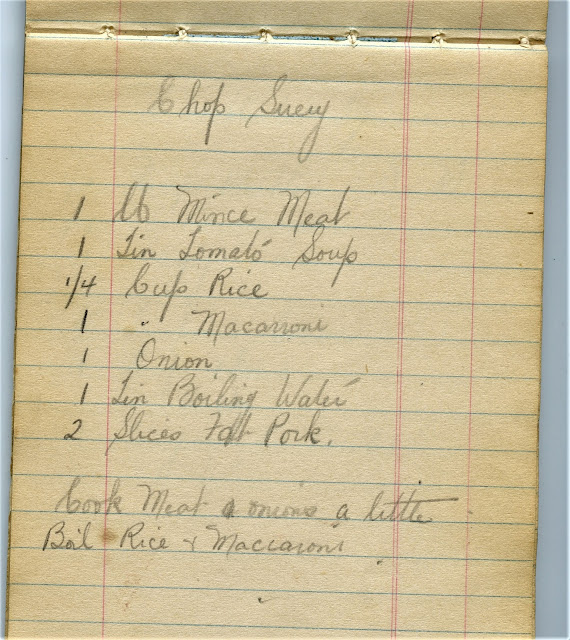 Where is that recipe from?

On a recent trip to Spaniard’s Bay for the Oral History Roadship Judy Symonds brought out some papers she had recently found while cleaning out her mother’s belongings. There was an old newspaper clipping from 1950 as well as a small recipe book. Although I didn’t have a chance to scan all the recipes I had a look through the book and scanned a couple of pages. The recipes inside were reminiscent of the time with white layer cake, salads with fruits like bananas and pineapple topped with sliced eggs, and fruit cake filled with raisins, sultanas, cherries, and almonds.

Among the recipes for shortbread and cakes was a recipe for Chop Suey which includes mince meat, tinned tomato soup, rice, macaroni, onion, boiling water, and fat pork. These ingredients seem to resemble Newfoundland’s version of goulash which typically consists of minced meat***, and macaroni in a tomato sauce with variable vegetables such as onions, bell peppers, and occasionally mushrooms more than a Chinese meal. After a quick internet search and a discussion with a friend from New England it seems like the chop suey recipe is a version of American chop suey which is a pasta dish resembling Newfoundland goulash with macaroni, ground beef, onions, and peppers in a tomato based sauce. It is interesting that the recipe showed up in a handwritten notebook in Newfoundland. I would love to know the background behind the recipe, where she found it, and why Judy’s mother kept the recipe.

The origin of chop suey itself is a hotly debated topic with folks arguing it is an American Chinese creation and others saying it was a Chinese dish which was adapted to the available American groceries and particularly vegetables. If you want to learn more about the Chinese community in Newfoundland and their expression of Chineseness check out Dr. Mu Li’s thesis “Wanderers between Cultural Boundaries: Exploring the Individual Expressions of Chineseness in Newfoundland”.

Share your stories and knowledge of food with the hashtag #FoodwaysFriday.
Tell us your favourite recipe and let us know the origin story!

***Judy Symonds emailed to clarify that the minced meat in the recipe simply means ground meat.