Update: I was informed that the item below is not a berry comb but actually a dory bailer, used to scoop out water from a boat. The bailer is also known as a a piggin, peggin, spudgel, spudget, spudgin or spudgy.  It looks a lot like a berry comb, but that's what I love about this job, you learn something new all the time! :D

Around this time every year I love to go berry picking. I pick mostly blueberries and find something very satisfying about gathering my own food, especially when it's free. Don't get me wrong, I love a good strawberry U-Pick, but around here you don't have to go far to find a barren or boggy area full of blueberries. Berry picking can be hard on the back, so to make the work faster people have used berry combs, like the one pictured below.

That berry comb above is actually missing the comb part, so I borrowed a picture of a complete one, featured below.This one is similar to the one used in Newfoundland, but was used by a man who lived on the southern shore of Lake Washington in Seattle. 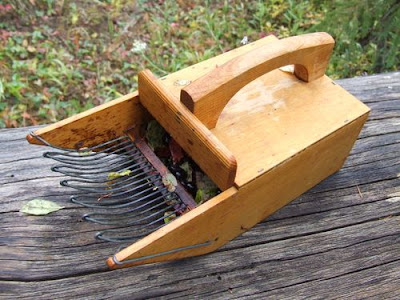 Here are a few terms used in Newfoundland and Labrador related to berry picking:

berry box: wooden box used by pickers to carry harvest of partridge- and blueberries.
T 1-631 We used to go berry picking and take berry boxes, forty or fifty, a couple of us together. We'd fill them.

berry duff: a boiled or steamed pudding with wild berries as an ingredient.
1966 HORWOOD 19 Blueberry pudding, loaded with luscious fruit, boiled in a cloth, and popped open, fresh from the pot and dripping with purple juice, on the kitchen table.

berry crop: the harvest of wild berries: 1976 Daily News 14 July, p. 2 Berry crops are blooming early this year and the director of the soils and crops division with the department of forestry and agriculture, is expecting a good season. 'Blueberries, partridge berries and bakeapples are already in bloom,' he said.

berry note: buyer's receipt issued to picker for quantity of berries received.
1972 MURRAY 261 Those who sold berries were given a 'berry note' indicating the amount of berries 'shipped' and the price per gallon. The value of the note had to be 'taken up' in goods in the store where the berries were shipped.

Posted by Nicole Penney at 10:40 AM No comments: