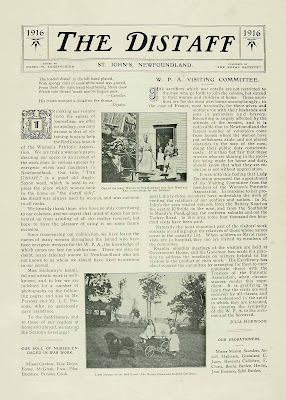 As promised, here is a bibliography with original documents such as Evening Telegram articles, the WPA's published magazine called The Distaff  and photos. Also included are books and articles. I hope this compilation quenches your interest!

** These are of particular interest but there are other volumes mentioning the WPA.

Duley Margot I. “The Unquiet Knitters of Newfoundland: from Mothers of the Regiment to Mothers of the Nation.” In A Sisterhood of Suffering and Service: Women and Girls of Canada and Newfoundland during the First World War, edited by Sarah Glassford and Amy Shaw, 51-75.Vancouver: UBC Press, 2012.
Part online at: https://goo.gl/158i0T.

Duley, Margot I. Where Once Our Mothers Stood We Stand: Women's Suffrage in Newfoundland, 1890-1925. Charlottetown: Gynergy, 1993.

Thanks to Terry Bishop Stirling for providing sources to this bibliography.
Posted by Stephanie Micikyan at 8:30 AM 1 comment:

Happy Tuesday to all! As you may be aware, I have been researching the Women's Patriotic Association as part of the Grey Sock Project. I came across this photo last week and wanted to share it with you.

This photo comes from the Walter Edward Davidson fonds at The Rooms. The women of the WPA would meet at the Government House for meetings, to work on knitting, sewing, sterilizing dressings and other tasks. The ladies in this picture are part of the Working Committee. Their purpose was to prepare workrooms, materials and to arrange work parties. Some of the women are knitting (far left - could those be grey socks!?) while others are using sewing machines.

I loved this photo the moment I saw it because you can see the ladies hard at work. I then discovered that the woman on the far left is Blanche Eleanor Bartlett, sister of Captain Robert "Bob" Bartlett which made me love it even more. Hope you enjoy this photo!
Posted by Stephanie Micikyan at 10:00 AM No comments:

Knitting Comforts and Beyond 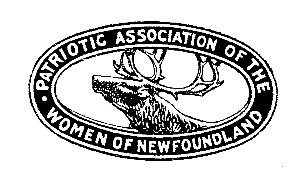 On August 31, 1914, Lady Margaret Davidson, the governor's wife, called a public meeting in St. John's. The 700 women who attended the meeting formed the Women's Patriotic Association (WPA). Today, the WPA is known for the knitted comforts they produced for Newfoundland and Labrador volunteers overseas. The grey sock was the most desired item as described by Private Francis Lind of the Newfoundland Regiment,

"A Newfoundland sock is the best in the world and is prized by every soldier. How many times at the Peninsula and before we ever saw Egypt have we been asked by soldiers of different regiments if we had a pair of Newfoundland socks to give them or sell them. They would even offer cigarettes in return." 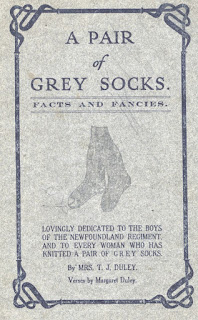 In the Evening Telegram the socks are described as being "of natural wool homespun and are made in the three principal sizes which are distinguished by rows of colo[u]red wool." It is recorded that 62,685 pairs of socks were knitted by the women of the WPA. The socks were considered more than comfort, it was actually military necessity. The War Office's Field Service Regulations included instruction for the care of feet.

For this reason, the women were required to follow the sock pattern provided strictly, in order to create the most comfortable sock. In A pair of grey socks: facts and fancies, it is described that the socks must be loosely knitted to make the sock soft for marching feet, must not reach the bend of the leg and have no chance of folding. This would cause great discomfort for the wearer. The knitting the WPA did helped greatly but the women went beyond knitting comforts to support the war effort.

The women of the WPA organized concerts, plays, teas, bazaars and raffles. They also sold patriotic calendars, souvenir regimental badges, flowers and other goods. The WPA supported people at home in the province by creating a Visiting Committee. They kept in touch  and visited with family and relatives of volunteers serving overseas. The committee also visited soldiers in local hospitals. In St. John's alone, the committee made 11,270 visits.

By the end of the war there was around 250 branches across the province and over 15,000 members.The WPA collected more than $500,000 which is worth about $6.5 million today. When looking at other initiatives the WPA undertook, it is clear that the women of the WPA exceeded expectations of patriotic support!

This is only some of the amazing work, written in summary, done by the Women's Patriotic Association. There are many sources available to learn more! Stay tuned for a bibliography so you can view articles, books, photos and original documents.

Posted by Stephanie Micikyan at 12:30 PM No comments: