"Running to my sister's bedroom window which overlooked the eastern portion of the tickle, I arrived there before the debris flung in the air had settled back upon the water. The Rose Castle, deeply laden with her heavy cargo of iron ore was mortally wounded, but after only a few seconds she was hit by a second torpedo, tearing her apart in a blinding flash, and with bow and stern sticking almost vertically in the air she quickly vanished beneath the surface."


New on our website is a first-hand account of the torpedoing of the ore carriers S.S. Saganaga and the S.S. Lord Strathcona by U-boat 513 in the waters off Lance Cove, Sept. 5, 1942, and the similar dispatching of the PLM 27 and the S.S. Rose Castle by U-518 in the same location the following November 2nd.  It was written by the late Lloyd C. Rees, and we've been working with his daughter Catherine Rees to get it ready for re-publication. It has originally been posted online in 1999, but a few pages were missing. We've added it to our Field Notes series, and included a new introduction by Catherine, placing the work of her father in context.

"Some Thousand Miles Apart, and a War On." The WWII Letters of Allen Squires and Pearl Morcombe, Portugal Cove-St. Philip's


In April I had the pleasure to work on a collection for the Town of Portugal Cove-St. Philip's, organizing the Allen and Pearl Squires fonds. The couple made a financial donation to the town in the 1980's to establish the community library, and with that donation came a box with some of the couples possessions, 35mm slides, war medals, and stacks of letters written during the second world war. When I first opened up the box, the stacks of beautifully handwritten letters, immediately peaked my interests.


The letters were all sent to Pearl Morcombe of Melrose, Massachusetts during the Second World War. Pearl corresponded with fifteen different people, family and friends who talked about their own lives and life during WW2. A large portion of the correspondence is from Allen Squires of St. Philip's, who had known Pearl years before, and had reconnected as penpals when Allen's sister Edna Tucker sent Pearl his address. Pearls mother was from St. Philip's, so Pearl already had some connection with the area, and Allan often wrote about the area, telling Pearl she should visit. They wrote about the war and their homes and families. He often talks about everyday life at war, the food they ate, where they slept, and their entertainment. While stationed in England, Allen wrote in a letter on March 13th 1941:

"If Hitler thinks he will brake the moral of the British people, he is making a big mistake. There's a little girl drives a van in every morning about 10 o'clock, with coffee and buns for the boys. The other morning she came in and told me she was up all night. I asked her what the trouble was, and she said there was about thirty fire bombs dropped in her back yard that night. So she said she worked on them all night with the men and helped to put them out, and still she was on the job at nine in the morning with her little van, with buns and coffee for the boys. I told her she ought to get a medal and she just laughed about it. I never saw people with such wonderful pluck. They are really marvelous. If there is any holes in our socks, they will take them and darn them, or if we want anything done, they are quiet willing to do it. They post all our letters. I don't think I shall ever forget them."

Through out his letters, Allen often talks about the women he meets at war, and tells Pearl she should find herself a boyfriend. As they continue to write to each other, and their relationship grows, Allen's writing becomes more romantic and he talks of their future together. On April 24th 1942 Allen wrote:

"I am living in hopes that some day I will be able to make you my little wife and we can live happy for the remainder of our life. That may sound funny. Some thousand miles apart, and a war on, but such things can happen."

Pearl also receives letters from other people, including those related to Allen and from Portugal Cove-St. Philip's. She writes to Allen's sister Edna Tucker, and his brother Leslie Squires who moved to the USA for work. There are letters from Edna's son Jacob J. Tucker who first writes when he is 16 and a member of the 1st St. Philip's Troop Boy Scouts and leader of the Boy Scouts orchestra in St. Philip's. He eventually goes to live with Pearl in Massachusetts for his health and seeking opportunity. Allen's mother Emma Squires writes to Pearl, primarily when she has not heard from her son and to ask if Pearl has received any letters. Emma Squires emotional letters are those of a worried mother, wondering if the war will ever end, and her sadness over the death of her husband Gus Squires. Most of her letters are steeped in melancholy, including one letter from September 26th 1944:

"Just as I am writing this I look [through] my window at such a lovely sunset, I never saw before. Just like a picture as it shined on the church just by my house, its red roof and all white. It made me feel so sad. And when I see anything looking so lovely it makes me think of things very sad. Well Dear, what do you think of the dread full time is going on now. I suppose this is the finishing of most of our Dear ones. I am thinking there isn't many of them going to be left by the time it's finished. I guess they will be most all thru with it all. I was in hopes of my Dear boy coming some time, but since this hard time have started I am feeling pretty bad at it all."


In one of the last letters, a August 14th 1945 letter forwarded to Pearl from Leslie Squires, Emma Squires writes about the end of the war and news that Allen is returning home to Newfoundland. She once again describes the view out her window, but this time with the joy and relief:

"The church bell is ringing now and Bell Island is all a light guns firing."

~ Kelly
Posted by Kelly Drover at 8:50 AM No comments:

These two photograph are from the Allen and Pearl Squires fonds at the Portugal Cove-St. Philip's Archives. Allen and Pearl visited his home town of St. Philips, taking 35mm slided in 1954 and 1962. The slides show the couples travels around the Avalon Peninsula including Pouch Cove. The above photo shows the Pouch Cove shop Alex C. Gruchy General Dealer in 1954. Allen Squires and Alex Gruchy served together in WW2 as part of the 166th Newfoundland Field Regiment Royal Artillery. Below is a photograph from Allen and Pearls 1962 visit, showing Allen Squires, Alex and Jean Gruchy with their children and a friends baby.

Are you from the Pouch Cove area? What do you remember about the Gruchy's shop?

#Folklorephoto Did you have a Newfoundland Certificate of Registration in the 1940's?

This Certificate of Registration belonged to Elsie Maud Whalen of Bradley's Cove. She was registered resident under the Defence (National Registration) Regulations on December 8th, 1942. Do you have memories of having one of these certificates? Did you have to show it to a police officer or Newfoundland Ranger? 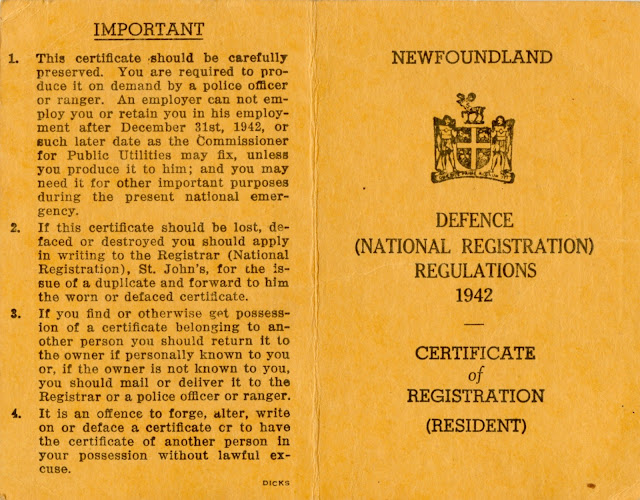 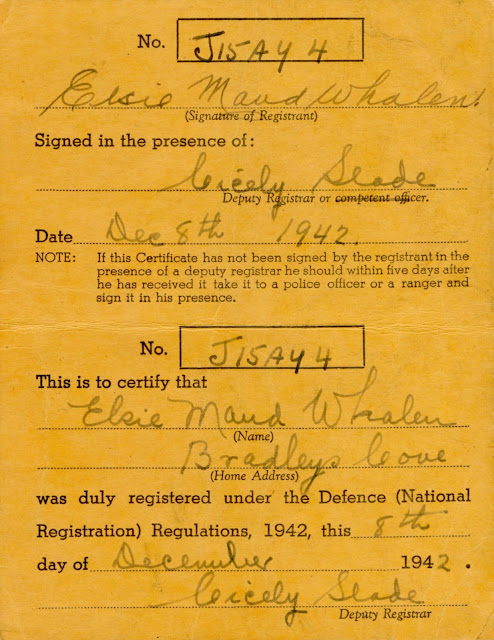 If you have information on these certificates, please email kelly@heritagefoundation.ca 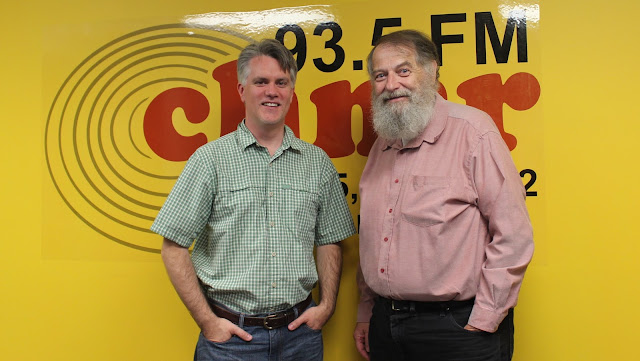 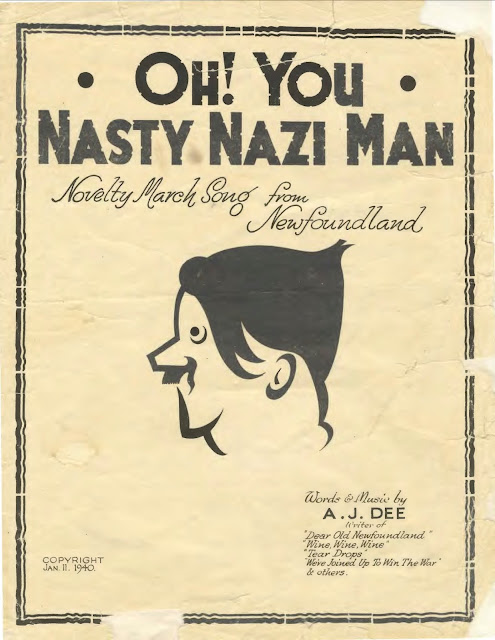 Those of you who follow the ICH blog know that we are often uploading information and interviews to the ICH Inventory on Memorial University's Digital Archives Initiative. It is an amazing resource for people conducting historical and folklore research, and the ICH Inventory is only one small part of the entire collection.

There is a recent uploads page for the DAI, which showcases some of the more recent items uploaded. While checking it out today, I came across this peculiar gem, a novelty march song from Newfoundland entitled "Oh! You Nasty Nazi Man" - a call-to-arms of sorts with a chorus that starts "Oh! you nasty Nazi man, Way over in Berlin, You know you haven't got a chance, This blinking war to win."

Words and music are attributed to A.J. Dee, and copyright is attributed to one A.S. Donnelly, of 20 McKay Street, St. John's. If you know anything about this piece of music, or the author, let me know, or leave a comment below!

You can view the sheet music on the DAI, or download a pdf here.
Posted by Dale Jarvis at 9:49 AM No comments: