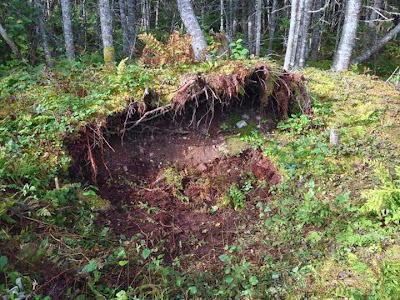 Last week I had the opportunity to go back out into the field and get my hands dirty with some serious archaeology. My graduate supervisor Barry Gaulton has been going out to a site in Sunnyside, Newfoundland, for the past several years with Steve Mills, and each time he goes out into the field he brings eager graduate students with him: this year it was my turn! The site is a 17th century winter house in the woods near the water, and based upon some of the artifacts we found it probably dates to the 1660's, and was probably used for only a year or two.

One great discovery this season was the location of what was most likely a root cellar to the west of where the house was. It's a little hard to tell in the photo, but this root cellar is built from mounded earth, and we uncovered a section of staining in the earth that was likely a 4 foot span of wooden flooring in the center. Although there isn't any remains left, the top of the root cellar would have been built of a combination of earth, rock and wood, drawn from the local resources at hand.

Root cellars would have been just as important 350 years ago as they were 50 years ago, or even today, especially during a cold winter with limited access to supplies other than what you could hunt or gather for yourself. I decided to share the photo I had of the root cellar this week for the folklore photo as a teaser for a blog post later on this week about my trip out to Sunnyside, and because root cellars are cool, and full of folklore-y goodness! And you can't go wrong with one from the 17th century.

Posted by Sarah Ingram at 11:53 AM No comments: