How to Make Your Own Sauerkraut

Fermenting your own sauerkraut is simple to do and takes very little preparation time--all you need is a head of cabbage (or more if you wish), salt, and a fermentation pot. I made some last week to help get excited for our Newfiki Festival. This Celebration of Eastern-European Cultures in Newfoundland takes place from March 20th-23rd. I myself am from an Eastern European family in Alberta and so had access to homemade sauerkraut throughout my childhood. When I was older, I realized that I would have to learn how to make it on my own in order to help keep our family tradition going. Mine is nowhere near as delicious as my grandmother's, but I am getting there. Here's a photo-guide of what I do:

For fermentation to take place, there must be adequate salt and the pot must be stored in a warm place. In about 4-6 weeks the cabbage should be fully fermented and ready to eat. When it has started doing its job, it will take on a sour smell (which you will notice throughout your house), and it will also start bubbling. Be sure to check on it once a week to remove any 'scum' that might be forming on or around the plate. If there are signs of mold, simply remove before it takes over the whole pot. I once met a Bulgarian woman in St. John's who claimed that she could save any ailing sauerkraut, so if something goes wrong, there's always hope.

Good luck making your own sauerkraut and let us know how it goes.
Contact: lisa@heritagefoundation.ca.

-Lisa
Posted by Unknown at 2:07 PM No comments: 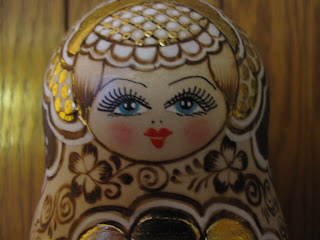 The matryoshka doll, also known as the Russian nesting doll, is often painted and made out of wood. It consists of a set of wooden dolls of decreasing size. The doll typically follows the “object within a similar object” or onion metaphor by placing the smaller doll inside the larger doll. The image painted on the doll is traditionally of a Babushka, which means motherly figure; this is where it derives its name. Another image that is typically painted is that of a peasant woman. This babushka or peasant woman are drawn wearing a head scarf, also called sarafan, and a long and shapeless peasant jumper dress. Which is the traditional dress for Russia. The centre and smallest doll is generally a baby wrapped up in cloth.

The artwork can also range from very simple to very elaborate. Although public perception is that of the head-scarf-wearing woman figure, matryoshka dolls are not limited in theme or gender. Other subjects include: animals, Christmas objects, music, films, sports, fairy tales, popular culture figures, political leaders, and males in general.

The very first Russian matryoshka archetype is said to have appeared at the end of the nineteenth-century. Russia was having an interesting period of economic and cultural development, as well as a rising sense of national identity. Artists like S.I. Mamontov (1841-1918) used folk toys from local regions or foreign countries to express this new art movement. It is thought that the idea of the matryoshka doll came from Japan on the island of Honshu, and that the idea for the doll was adapted to fit the needs of the toy makers. However, there are other stories behind the creation of the first Russian matryoshka doll.

The dolls seen here are owned by Irina Glazkova, who came from Russia to Canada in 2007 in order to attend Memorial University. Her collection of Matryoshka dolls was given to her as a present from a friend who returned from a trip to Russia. Irina told me how she grew up with the dolls and how different regions of Russia have taken the doll and recreated and or adapted it to fit their own style.

Irina: Matryoshka dolls became an integral part of society. Differences are based on colour and ornaments. I played with them since I can remember. In addition, me and my mom would also make up stories about them. 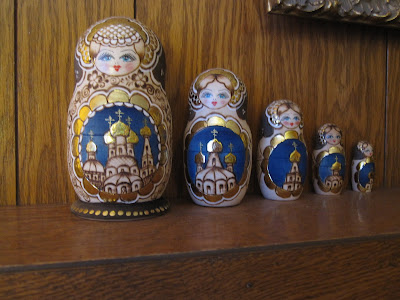 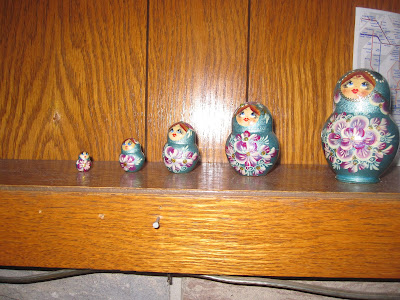