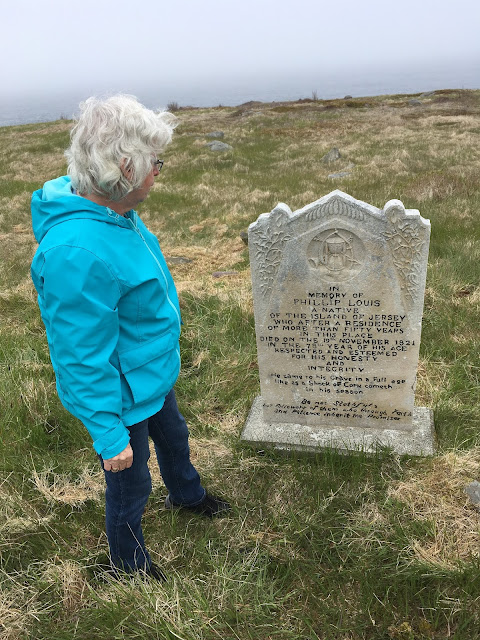 On a cold and wet Friday, June 15, 2018, I visited Lower Island Cove, Conception Bay North, with Judy Rogers as my guide. While there, Judy took me to one of the oldest burying places in Lower Island Cove, a section of the community on a hill close to the water, which is locally called The Mount.

The cemetery sits in a windswept, barren spot, overlooking the community, and wild grasses have largely obscured the majority of the rough-stone grave markers. There is only one visible carved tombstone, marking the grave of Judy's fourth-great-grandfather, Phillip Louis. The inscription reads:

Be not Slothful,
but Followers of them who through Faith
and Patience inherit the Promises

The stone, reset in a more modern concrete base, also features a well-carved hourglass and scythe motif, surmounting a crossed arrow and trumpet. The scythe can be seen to represent the reaping of life and the hourglass representing that earthly time has run out. The hourglass has also been interpreted as a memento mori, reminding we visitors that we are one hour closer to our own deaths. More cheerfully, the ivy (or vines, botanists feel free to weigh in on this) on either side of the stone could be interpreted to represent memory, immortality, friendship, fidelity, faithfulness, undying affection, or eternal life. 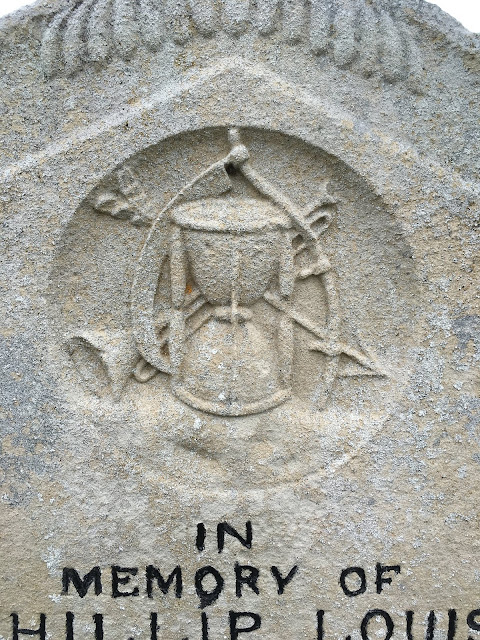