On April 19, 2017, as part of the Collective Memories project, I interviewed Roberta Bugden about her memories of growing up in St. John’s. She told stories about riding the street car twice for the price of one trip, buying braces of rabbits from Mercer’s and fish from the harbour front, and her father’s work as a buyer for the Royal Store.

Roberta also told stories about her grandfather Ross’ move to Newfoundland from Scotland and recounted stories her mother, Queen Victoria (Ross) Young, had told her about the Great Fire of 1892. The Ross family farm was located on the North Side of Quidi Vidi Lake adjoining Mount Carmel near the temporary accommodations built by the government after the Great Fire of 1892.

Roberta was born August 16, 1931 and her mother was Queen Victoria (Ross) Young born March 23, 1885. In the following clip Roberta describes her mother’s memories of the Ross farm and of the Great Fire of 1892. Roberta's full interview can be found on Memorial's Digital Archives Initiative.


"This place is going to burn down, my boy," he remarked jovially, to an acquaintance: "go home and pack your little bundle." Still, people believed Water Street perfectly safe. I went into tea and was greeted with the news that all west of the Episcopal cathedral was burned. Scotland Row, the range of houses in front of the cathedral, was then burning. People were gradually becoming panic-stricken. I remarked to my landlord at tea: "This is going to be a bad night for St. John's." - Our Great Fire, By An Eye-Witness in the Morning Despatch July 19th 1892

This July marks the 125th anniversary of the Great Fire of 1892, which destroyed much of St. John's and is remembered as the worst disaster to befall the city. The City's commemorative activities will take place on Saturday, July 8th and Sunday, July 9th, 2017.  Visit City of St. John's for scheduled of events.

Posted by Kelly Drover at 8:50 AM No comments:

Walking through the Great Fire of 1892 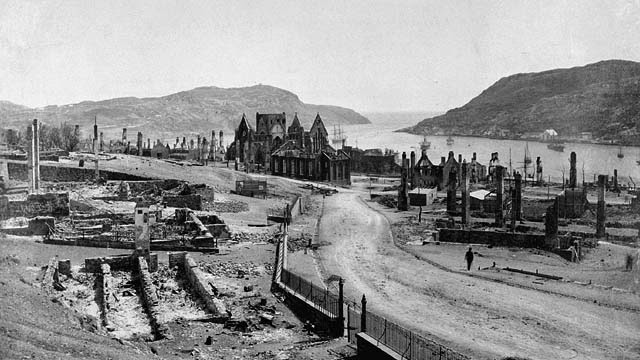 The Newfoundland and Labrador Historic Trust (“The Trust”) is accompanying the launch of the latest version of its Walk St. John’s app with a real-time history lesson. On Tuesday, July 8, the Trust will live-tweet the events of the Great Fire of 1892 from its account @NLHistoricTrust using #GreatFire1892.

The Walk St. John’s app allows users to experience the alluring streetscapes and heritage architecture of the city, which stand as a testament to the resilience and perseverance of its citizens who rebuilt time and again over the ashes of its past structures.

The app, created with the assistance of local developers TPLED Technology Inc., was initially released for iPhone and iPad in 2012. It allows users to select from several round-trip historic walking tours which guide them through the streets of St. John’s. The new version of the app includes a fifth tour tracing the path of the Great Fire of 1892 and is now also available for Android devices.

“The Great Fire dramatically altered the City of St. John’s,” said Robyn Pike, President of the Newfoundland and Labrador Historic Trust. “Using the app to explore the path of the fire and following #GreatFire1892 on July 8 will introduce you to the places and people that were forever changed by the events of that day.”

The information used to compile the fifth walking tour was collected by a student researcher employed by the Trust in 2013. A founding member of the Trust, Shane O’Dea, provided a voiceover to highlight points of interest along the Great Fire tour.

The Newfoundland Historic and Labrador Trust, established in 1966, is a membership-driven, non-profit organization dedicated to the preservation of all forms of architecture reflecting the culture and heritage of Newfoundland and Labrador.

Posted by Dale Jarvis at 6:24 PM No comments: