Archaeologists thrive on finding the refuse of the past. By uncovering the remnants of meals, household items, clothing and daily life, we can try and better understand the culture we are studying, which is done through document research, surveying, excavation, and analysis. For an archaeologist, the less disturbed a site is when we arrive to do an analysis, the better the information we can collect. Excavation is all about relationships: how the different artifacts relate to the site, and how they relate to each other. 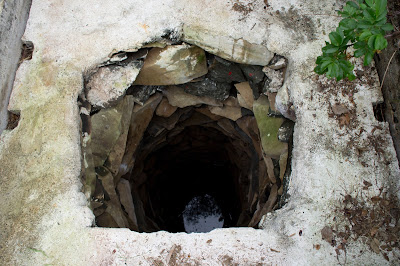 Water has always been an important resource, and any archaeological excavation will either find a place where water was found and collected nearby, or where a well was dug or a spring was used. As a historical archaeologist, I know several 16th and 17th century sites in Newfoundland had wells, or have documentation associated with them that comments on how clean and pure the local water was. Wells hold the opportunity to not only hide within them a rich collection of archaeological artifacts, but the majority also have these artifacts still layered in the order they were deposited, allowing the archaeologist to understand changes through time much more clearly.

Ferryland, Newfoundland has at least two wells associated with the site: one that dates to the late 17th century, and one that was uncovered a few field seasons ago. While only preliminary reports are available on the newest find, Dr. Barry Gaulton from the MUN Archaeology department, the lead archaeologist at Ferryland, was able to share details about the Ferryland well.

“It was stone lined, 25 feet deep, built upon a wooden curb (found at the base of the well), and dates to the late 17th century. An elderly man from the community (Wilfred Costello, now deceased) who told Jim [Tuck] in 1994 about the location of the well … Wilfred’s grandfather told him about the well when Wilfred was only a young boy. Even at this time (about 80 years ago) the well was no longer visible, and there was certainly no trace of it on the landscape in the 1990’s”.

Wilfred came to Jim Tuck, the then lead archaeologist on the site, with a story that he had been told by his grandfather of an abandoned well on the Downs; “how a young boy had accidentally [fallen] into this old abandoned well and drowned. The residents of Ferryland at the time (probably late 1800’s) retrieved the boy and filled in the well with large rocks so no one else would be hurt. The archaeological evidence certainly corroborates this story. The well was [rapidly] filled from top to bottom with rocks and some 19th century debris”.

The Ford’s well in Cupids, Newfoundland, was once a simple spring coming out of the rocks, but now is surrounded with a cement base and has a recycled stop sign fashioned as a cover. William Gilbert, the head archaeologist on the Cupids plantation, believed that the brewhouse of John Guy was in close proximity to it, and although past survey work did not reveal its location, it could still be hidden closer to the shore for future excavations to uncover. Future excavations could be dictated based on interpreting this spring as an important element of the early site layout. There is also a wellhouse in behind the current Cupids archaeological dig, where the plantation house sits. It has been sealed for safety reasons, and has not been excavated yet, though Bill does hope he can get to it in the future. An untouched well is a great situation for refuse. For one, once a well has served its purpose and is no longer used, it is likely that a community will use it to get rid of garbage, and so many wells have layers of preserved refuse from past residents. Secondly, the layers are less disturbed than those on the surface, as the natural processes and human activity that affect surface artifacts do not affect the artifacts preserved in a well. Unfortunately, Bill has yet to find the time or the funding to schedule the well excavation, and so it remains untouched for the future.

Stories like how the location of the Ferryland well was found, or how interest was sparked in the Ford’s well in Cupids that lead archaeologists to a potential feature no longer visible on the ground surface really demonstrate how important and valuable oral histories can be as a contribution to archaeology. These passed on stories and legends show how both folklore and archaeology can work hand in hand to understand and preserve the past. It’s something that I love about archaeology; combining the past and the present together to gain a better understanding of the landscape, and incorporating the community and the local tradition into my analysis to find something not readily visible from the surface. Wells especially are a great resource, and one that can easily become hidden from the ground; sometimes these types of stories are the only way they can be found!

If you have any wells, springs or water memories that you would like to share, please reach out! You can email me at Sarah@heritagefoundation.ca, or call me at 739-1892 ext. 7
Posted by Sarah Ingram at 1:59 PM No comments:

Wells and Springs along the Southern Shore

On Wednesday I spent the day with Andrea along the Southern shore, meeting some interesting people and visiting and recording some excellent wells and springs. We had a really busy day planned, and started out meeting with Jim Foley, a local man who took me down to the shore and showed me a natural spring he had been using for years to drink from. The spring comes right out of the rocks, and is used predominantly in the summer and fall, as during the winter it gets covered with rocks and ice. He said occasionally some sea water will get into the spring, but there is such a consistent water flow that it never effects the taste or clarity of the water. He said that fishermen used to stop and use it years ago to drink from. 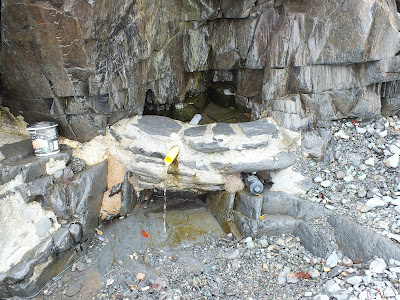 The cement enclosure around the spring was an addition added in recent years by Al Roche, who Jim was kind enough to introduce us to. Al told us that he tried to make it safer to get down there by adding rock steps as well, however the last couple years has seen some deterioration along the shore, and the steps have since let go. There used to be a “spring” sign to show visitors where they could get a cool drink, but has been taken down for safety reasons. 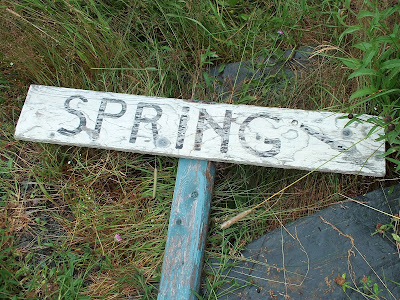 We then met up with Tony Dunn, who had a lot to both tell and show us. He first took us to his own well, which shares space with several other large wellhouses. He told us that at one time there were over 13 houses being served by these wells, which equaled up to 50 people! His well was one of the shallower ones we've seen so far, and he said that he's never seen it run low. There was over three feet of water on Wednesday, and it was also incredibly cold and fresh. He then took us to his brothers well, which was rock lined and protected by heavy plastic siding. Tony also has a hidden talent - he can find underground water with wire! He showed us how it worked, and let us try it ourselves. We both had success, and below you can see Andrea finding some water with wires!

Finally we went and spoke to Andrea's family, Andrew and Dot O'Brien. Over tea and banana bread they shared some great water and well memories with me, including carrying water to the house with hoops, a barrel well in their front yard, cleaning wells, and communal tin mugs left at a community water source for everyone to enjoy. Andrew then took me up to his well, which was by far the biggest one yet, and is shared between several homes in the neighbourhood. It was a great day out in the field! 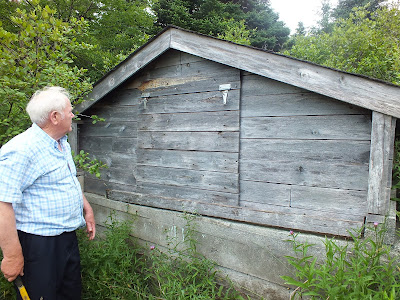 We are still looking to hear any memories people have about wells, springs, water dowsing, and I would love to hear from you! You can contact me at 1 (709) 739-1892 ext 7, or email Sarah@heritagefoundation.ca.

Posted by Sarah Ingram at 11:30 AM No comments: