Parachute Petticoats
By Nicole Penney
Do you know the store of the girl whose life was saved by her dress?
As the tale goes, a young girl fell from a very high cliff but was not injured. She couldn’t remember anything about the fall, but it was generally accepted that the wind was so high that it gathered under her dress and parachuted her safely to the beach… some 200 feet below!
In the version relayed to me, the girl is named Janis aka Jane/Janay Phillips and the event took place around 1935 in Bonavista, between Spillar’s Cove and Cable John Cove.
Upon researching the details of this account, I discovered many more examples of life-saving dresses. As it turns out, the “parachute petticoat” is a well-used media trope. In Disney’s Alice in Wonderland, Alice’s dress puffs out, allowing her to drift, unharmed, down the rabbit-hole. There’s also the Baroness Bomburst floating back to earth with the help of her petticoat in another Disney film, Chitty Chitty Bang Bang. The so-called parachute petticoat has been utilized over and over in TV and movies, especially cartoons.
Interestingly, it seems the trope may stem from reality. There are numerous historical accounts of dresses, particularly hoop dresses, saving lives. According to The News and Observer, a Raleigh, North Carolina newspaper, a woman by the name of Mrs. Louisa Biggs Station Yates was travelling on the Mississippi River when the steamer caught fire. Mrs. Yates jumped into the water and was saved by her hoop skirt, “which was fashionable in those days.”
The book Bridging Saint John Harbour by Harold E. Wright includes a story from Saint John, New Brunswick about a Victorian woman who threw herself in the dark waters of the Reversing Falls, a series of rapids in the Saint John River. She was saved from certain doom when her “her hoop skirt acting as a parachute.”
The following event occurred in Munfordville, Kentucky and was compiled by Edith Bastin as part of the Polston/Poston Family Index. According to Bastin, Nancy Josephine 'Josie' Harrod Edwards aka Granny Edwards, often told her grand-daughter about the adventurous stories of her life. In one such story, Granny Edwards and Grandpap Edwards were walking to Munfordville from their Rowletts home and as they walked across the Green River via the railroad trestle at Munfordville, they heard a train coming. Grandpap climbed over the edge and held tight to the railroad cross-ties for the train to pass. While Granny was holding the cross-ties, the train was rumbling overhead and she lost her grip. As she fell to the ground, her big hoop skirt ballooned out and let her down easy. The hoop skirt again acted as a parachute!
There’s also Mary Kingsley, an English ethnographer, scientific writer, and explorer whose travels throughout West Africa and criticism of missionaries helped shape European perceptions of African cultures and British imperialism.  On more than one occasion she fell into a game trap, a deep pit dug by hunters to catch unwary animals, and found that her skirts saved her legs by snagging on the sharp spikes of ebony. Not quite a parachute petticoat, but a life-saving dress nonetheless.
The account of Ms. Janis Philips, isn’t even the only parachute petticoat story found in Newfoundland and Labrador.  A letter from Franklin Arbuckle dated May 29, 1945, published In the St. John’s Telegraph, recounts the story of “Lover’s Leap”, a cliff located between Ship Cove and Blow Me Down.
According to residents, in 1864 a young couple, Charles Dawe and Brigitte (Biddy) Warford, were leaning on a wooden rail on the eastern gulch in Daniels Hole as they had their goodnight kiss. Suddenly, the rail gave way and the two fell more than 60 feet to the beach below. Brigitte survived with light injuries, but Charles was seriously injured.
Gerald W. Andrews states in “Heritage of a Newfoundland Outport: The story of Port de Grave,

“It was surmised that both were saved from instant death by the fact that Biddy was wearing a hoop skirt which acted as a parachute to slow their descent, and it hooked in to a ledge before their final impact.”

Brigitte carried her love to safety, Charles recovered and they went on to marry. It was later discovered that the rail had been sawed.  Apparently Brigitte’s family disapproved of the relationship and her brother, Azariah, came under suspicion. However, it would never be proven.
If you’re questioning the veracity of these stories, you’re not alone. I mean, the stories sounds plausible enough but can a dress really save a life or is this the stuff of legend? To answer that, we need to look at what exactly a legend is.
According to folklorist Elliott Oring, “legends are considered narratives which focus on a single episode, an episode which is presented as miraculous, uncanny, bizarre or something embarrassing.” Our parachute petticoats definitely have the miraculous, uncanny and bizarre going for them. Also, legends are set in an historical time and often makes reference to real people and places. Life-saving dresses cover this aspect of legend as well. Moreover, the structure of a legend by its very nature makes the question of its “truth” subjective. Legends often depict the improbable within the world of the possible and force us to negotiate the truth of these episodes. The dress stories leave us to ponder not only the limitations of gravity but also petticoat aerodynamics.
Sadly, it seems our parachute petticoats might be too good to be true. Upon closer examination, the stories are likely an example of migratory legend. That’s not to say a dress couldn’t save a life, but these tales have all the hallmarks of a legend. But as far a legend goes, the truth of the story isn’t really that important anyway. Legends are told because they are interesting, entertaining and amazing stories that require the audience to examine their worldview. Legends are valuable folk narrative because they not only entertainment us, but require us to question our sense of the normal, the boundaries of nature, and conceptions of fate, destiny and coincidence.
But there’s so many newspaper accounts of this actually happening. How could the parachute petticoat be a legend if the story was documented in the media? This is actually another characteristic of legend. Many urban legends have been reported on in the media as though they were true. Take for example the century-old legend of the alligators that supposedly infest the sewers of New York City.
Having made the news repeatedly over the years, it was first reported in a 1907 article that described a worker in Kearny, a New Jersey town about 12 miles from Midtown Manhattan, who was bitten by a small gator while he cleaned out a sewer. The media often legitimises a legend by reporting on it and by doing so, helps transmit it. 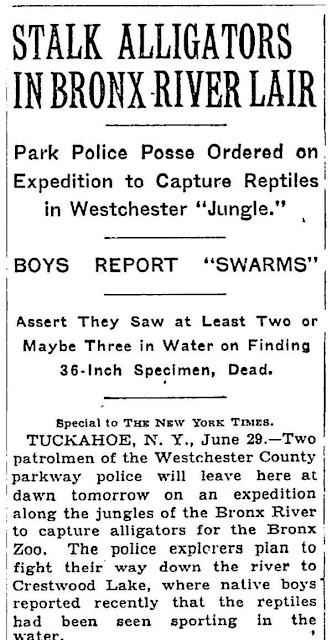 It’s said that journalists came from St. John’s to interview the Jane Phillips and her mother for the papers. I suspect this story is a local legend but would love to find evidence that it actually occurred. If you’ve heard this story before, please feel free to reach out!
Nicole R. Penney
Archival Assistant
Memorial University of Newfoundland Folklore and Language Archive (MUNFLA)
n.penney@mun.ca