Salmon Fishing on the Quinton Premises 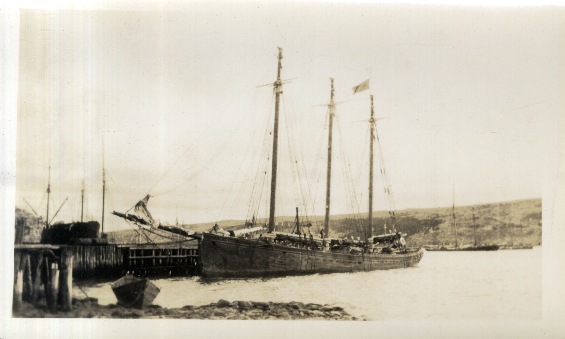 Historic image of a schooner in Red Cliff
The Quinton Premises was an important, central, place of business in Bonavista Bay from the mid 19th century until the late 20th century. In fact, in an interview with Hilda and Dorothy Quinton, who both married into the Quinton family and worked for the premises for many years, the women recall that people would come from all over to package their fish and purchase bulk supplies from the shop. In this interview, Hilda and Dorothy also talk about the salmon fishery on the premises - and how the business would ship fish across Eastern Canada and as far as New York.

The salmon fishery was not a small operation. Dorothy told us that at its peak, she remembers they packaged and shipped 100 boxes of salmon in a day - with each box weighing around 100lb. Preparing salmon is a different process from preparing cod, in part because salmon needed to be kept cold unlike cod - which doesn’t need to be cold once salted. Before refrigerators were invented, and before electricity was installed in Red Cliff, the best way to keep salmon cold was with an ice house. In the winter, men from the town of Red Cliff would cut ice from nearby Tickle Cove Pond and stored in sawdust in the ice house to keep it from melting. During the fishing season, men would go up to the shore of Labrador to catch salmon in a schooner. When the salmon arrived on the premises it would be prepared and packaged in the icehouse before being sent off to North Sydney, where it would be re-iced and shipped off to its final destination.

While they didn’t fish themselves, Dorothy and Hilda played their part in the fishery as well. When the fishermen came into town the population would temporarily grow, with many people staying at or near the Quinton Premises during their stay. In addition to their duties in the shop, Hilda, Dorothy, and other women on the property would make sure that all the workers had something to eat. In fact, both Hilda and Dorothy made sure to tell us that getting to eat fresh, fatty salmon was the best part of the fishery!