A history of the Lane/Heffern House in Salvage, Bonavista Bay 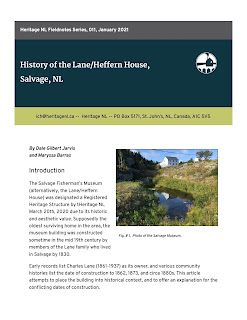 The Salvage Fisherman’s Museum (alternatively, the Lane/Heffern House) was designated a Registered Heritage Structure by Heritage NL March 20th, 2020 due to its historic and aesthetic value. Supposedly the oldest surviving home in the area, the museum building was constructed sometime in the mid 19th century by members of the Lane family who lived in Salvage by 1830.
Heritage NL has been working with the museum committee on documenting the history of the structure, which has proven to be more complicated than originally thought. It may be that the building was constructed in two phases, which would explain some of the quirks of the building itself.
You can download the full report in pdf format and get all the architectural gossip right here.
Posted by Dale Jarvis at 9:45 AM