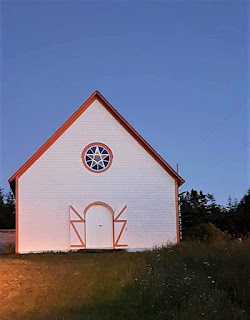 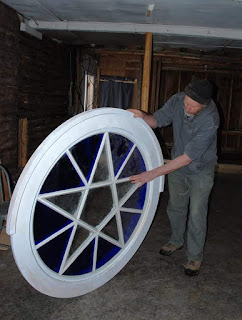 Mike Paterson delivering the Star of the East window. Photo courtesy of Nancy Brace.
The Loyal Orange Lodge, also known as the Orange Order, is a protestant fraternal organization. The Orange Lodge was established in Northern Ireland in 1795 in support of the Protestant monarchy in Britain. Every year on July 12th, the Orange Lodge celebrates the 1691 victory of Protestant Prince William of Orange, or William the Third, over the Catholic monarch King James the Second. Lodges all over the U.K. and North America traditionally hold an Orange Day parade on July 12th. 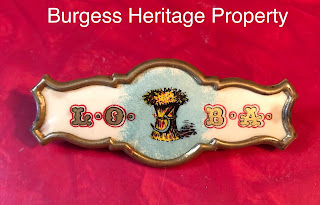 The Loyal Orange Lodge also had a women's association. This pin belonged to Jane Burgess (née Butt) born 1877 in Blow Me Down. She married Richard Burgess from Whiteway in 1901. As there was no lodge in Whiteway, they were both members of the Green’s Harbour lodge. Jane Burgess was made a honorary member of the Lodge on her 90 birthday in 1967.
Photo Courtesy of Burgess Heritage property.
In Newfoundland, the Orange Lodge serves many functions. One of the tenets of the Lodge is to encourage its members to do good works in their community without seeking recognition. The Green’s Harbour Orange Lodge is now amalgamated with nearby communities, but Nancy and the Green’s Harbour Heritage Society are looking to adapt the historic Lodge building as a multi-use center for the community. In this interview, Nancy shares stories about the lodge and the new life being brought to the building through restoration.
This episode is part of a special series about the Baccalieu Trail region of Newfoundland and Labrador. Join us as we explore the hidden gems of the Baccalieu Trail- from stories of phantom ship sightings to local art and history.
###
Living Heritage is about people who are engaged in the heritage and culture sector, from museum professionals and archivists, to tradition bearers and craftspeople - all those who keep history alive at the community level. The show is a partnership between HeritageNL and CHMR Radio. Theme music is Rythme Gitan by Latché Swing.
Posted by Natalie at 7:28 AM