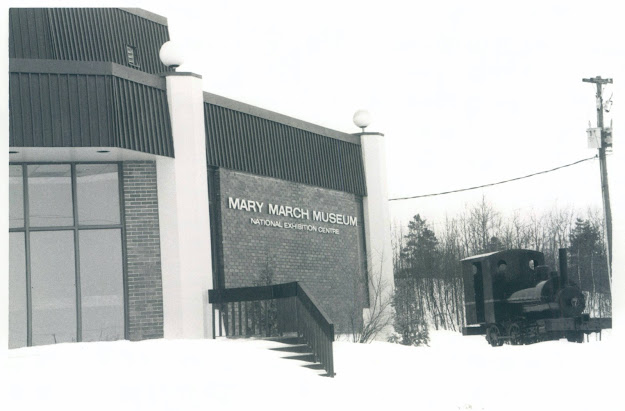 I had a request for information on the history of the Mary March Museum, in light of the recent discussions over its name. Here is what I've found.

The Mary March Museum started in 1973 and was housed in the Penthouse room at the top of the Provincial building in GFW. It was run by a board of directors. In the early 1970s the board managed to get Federal funding to establish an Exhibition Centre which would become the current museum.

Sod was cut to start work on the museum June 14, 1976. More:
http://collections.mun.ca/cdm/compoundobject/collection/trident/id/637/rec/4 page 5

The Museum opened in 1977:
http://collections.mun.ca/cdm/compoundobject/collection/trident/id/610/rec/5 page 4

And closed in 1981 due to lack of funds (plus information on the locomotive in the photo) page 52
http://collections.mun.ca/cdm/compoundobject/collection/cns_decks/id/4312/rec/1

The Museum was taken over by the province in 1985:
https://www.assembly.nl.ca/houseBusiness/Hansard/ga40session1/May27-1985.pdf
page R974

At some point in the 1980s there was a reconstruction of a Beothuk encampment associated with the museum. Do photos of this exist??

Archival photo of the building circa 1988:
http://collections.mun.ca/cdm/singleitem/collection/decksphotos/id/3283/rec/8

A petition was made in 2006 by local students to change the name:
https://www.cbc.ca/news/canada/newfoundland-labrador/rename-museum-for-beothuk-s-sake-students-1.579197
And
https://briarpatchmagazine.com/articles/view/demasduits-museum-grade-two-students-petition-to-set-the-record-straight

The petition was presented to the House of Assembly by Anna Thistle, the member for Grand Falls-Windsor:
https://www.assembly.nl.ca/HouseBusiness/Hansard/ga45session3/06-11-20.htm#1470

Discussion resurfaced in 2020 with the town council seeming to be in favour of a name change:
https://www.saltwire.com/lifestyles/local-lifestyles/renewed-interest-in-changing-name-of-provincial-museum-in-grand-falls-windsor-460778/#.XufzBI4Mtws.twitter
And
http://ntv.ca/mary-march-museum-may-soon-be-changing-name/

One response to the proposed change suggested the museum needed to go further, and operate as more than a seasonal museum:
http://ntv.ca/qalipu-councillor-says-changing-name-of-mary-march-museum-would-be-good-first-step/

UPDATE: The first Curator of the Museum was Glen Stroud. The Beothuck village reconstruction was never part of the Museum, it was established by the EVTA, Exploits Valley Tourism Association and run seasonally by them. It was put in place with the help of Don Pelley, Lloyd Seaward and a few other people.
Posted by Dale Jarvis at 3:00 PM

Email ThisBlogThis!Share to TwitterShare to FacebookShare to Pinterest
Labels: museums