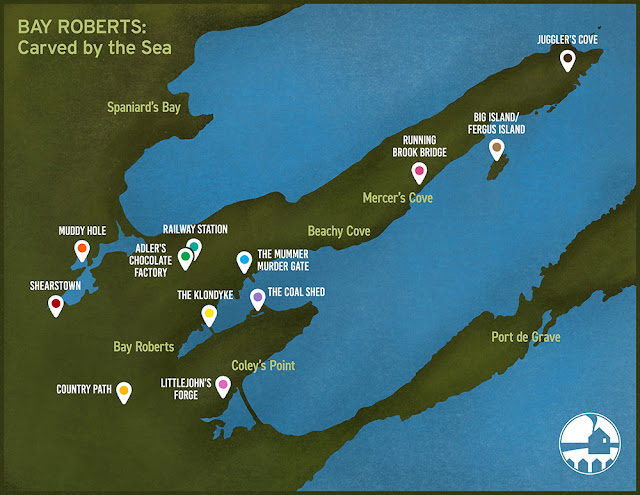 The community of Bay Roberts is rich in local history and folklore. Today, a selection of its stories go online as part of Carved By The Sea, an exhibition developed by the Town of Bay Roberts Heritage Committee and Heritage NL, with an investment from the Virtual Museum of Canada.

European fishermen visited Bay Roberts as early as the 16th century. Fishermen from Brittany and Normandy fishing the waters off the coast of Bay Roberts in the early 16th century named the harbour Baie de Robert. They established onshore fishing rooms where they dried and salted codfish, most likely near the end of Bay Roberts harbour.

By the late 16th century, Bay Roberts had become part of the English Shore, and West Country fishermen began to settle in the area. Seary's Family Names of the Island of Newfoundland states that families with the surname French arrived circa 1634 and the Earles and the Badcocks arrived in the 1660s. Families such as the Parsons, Mercers and Bishops arrived later, and a further wave of settlers from the Channel Islands arrived in the 18th century.

“This website is a great opportunity to share the stories of this place,” says Heritage NL folklorist Dale Jarvis. “Some of the sites featured are well known, while others are special neighbourhood locations that might not be well-known outside of the community, and all of them are available in both English and French.”

This exhibition was supported by the Virtual Museum of Canada investment program under its Community Stories investment stream, which helps smaller Canadian museums and heritage organizations work with their communities to develop virtual exhibits that engage online audiences in the stories, past and present, of Canada’s communities. Fieldwork support was provided through the Helen Creighton Foundation.

Originally consisting of five smaller communities: Bay Roberts East, Bay Roberts, Coley's Point, Shearstown / Butlerville, and Country Road, the town was amalgamated into the Town of Bay Roberts on February 24, 1951. Today, the community is home to about 5,300 people and serves as a commercial hub in Conception Bay. It continues to be home to many long-term residents who keep alive the folklore and oral history of the town.

English:
Carved By The Sea