A Traditional Bonfire Night in Heart's Content - by Claude Rockwood 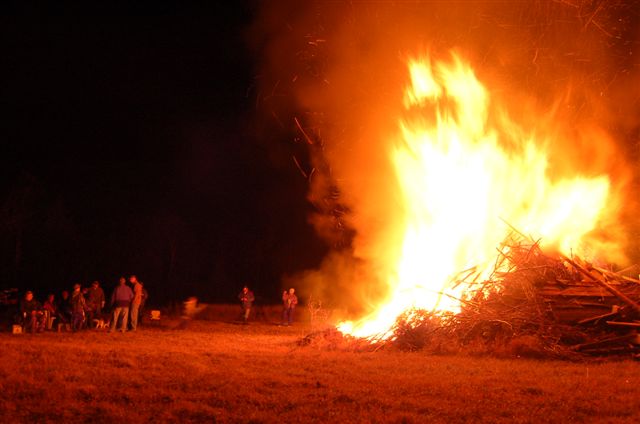 About a month or so before bonfire night a crowd of us, boys and girls ages 8-10, from the Northern Point would rush home from school every day and head for the woods. While the boys cut trees and boughs, the girls would drag them to the wide open field located up behind Uncle Albert and Aunt Lydia’s house (no relation). Believe it or not, but all this was done without grown-up supervision. Then we would pile them as high as we could pile them.

Bonfires could be seen all over the Harbour - Southern Cove, Rockwood’s Room, Rowe’s Bank, and Up the Backway. Now the big thing was to gather up as many boughs and trees as you could so you would have the biggest bonfire in the Harbour.

After the bonfire was over, we would all go to Uncle Albert and Aunt Lydia’s house  for a big scoff of pork and cabbage. For the scoff, we would all bring along some vegetables- cabbage, potatoes, carrot and, of course, each of us would have their own piece of salt meat. Aunt Lydia would supply scoff  vegetables from her own garden, as well. Everyone would sit around and have a fine old feed and chat about anything that came to mind. And you know, the smell of smoke from our clothes didn’t seem to bother them at all. I think Uncle Albert and Aunt Lydia were only too glad to be able to take part in the bonfire night with us children.

Bonfire night went on for several years until Aunt Lydia died in 1947.

This story was related to me, Claude Rockwood, by Mary (Mame) Burrage ( nee Piercey ) who grew up on the Northern Point, Heart's Content. Albert and Lydia Langer were my maternal grandparents.