European settlers in Newfoundland and Labrador used red ochre as a combination of preservative and colour pigment. One use was for “barking” or “bark tanning” nets, sails, and fishing gear to preserve it. The exact mixture of materials used to tan sails varied over time and from community to community, and it could contain some magical combination of ingredients including red ochre, cod oil, urine, seawater, beeswax, and/or birchbark extracts. The combination of ochre and oil adds to the weight of the canvas, but, “sails dressed by this method are durable, supple, and waterproof so that they do not become stiff and heavy in wet weather” (Worth para. 8).

As another option, sailworkers could use what was known as “cutch” - a type of tree bark extract which was imported to Newfoundland and Labrador from the Victorian period onward. McAlpine's Newfoundland Directory for 1894 to 1897 (151) references St. John’s merchant John Steer as a dealer in “Pitch, Tar Oakum, Resin Cutch, Lime, and Ochre.” Merchant Colin Campbell of St. John’s advertised in the April edition of the Evening Telegram in 1908 that he was wholesaling “Fisher-Lad” brand cutch, available in both blocks and slabs, “pure and unadulterated” which had recently arrived via the steamship Carthaginian.

Where commercial cutch was not available, fishermen made do with what they had, and that usually meant oil and ochre. As Francis Reardon told me,


The other thing that ochre was also used for, it was mixed with seal’s oil and used to put on the sails. It gave the sails on the schooners this really bright red colouring as opposed to now of course the white sails. But years ago when they were using the canvas sails they were red. Red ochre was a preservative, and also seal’s oil gave the sail a bit of a glaze so there was less friction in the wind, and it kept the sail from holding water. The water beaded away from it. 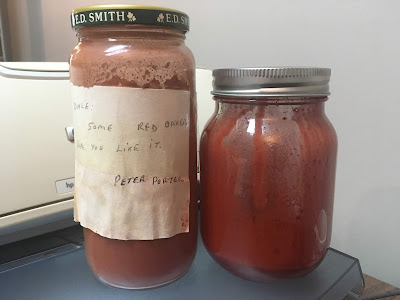 Doctor and a naturalist Charles Wendell Townsend spent May-June 1909 sailing along the Labrador coast. In his book A Labrador Spring he notes several examples of these ochre-stained sails. Upon visiting the community of Esquimaux Point (likely Havre-Saint-Pierre along the Lower North Shore of Quebec) he noted the local two-masted schooners, describing them as picturesque, “especially when the sails were dyed a light pink or terra cotta red to preserve them from the weather” (Townsend 72-73). Further along the coast, he remarks about the boat he sailed upon:


It was schooner-rigged with two masts, and, although the owners took great pride in the white sails, and said the boat could therefore sail the faster, I myself regretted that the sails were not stained a picturesque red, or pink, or brown, as were those of many other barges in this region. Some of these stains were wonderful bits of colour, shading like a water-colour wash from dark mahogany in one part of the sail, to a light pinkish hue in another part. Others were more uniform, but the effect was always pleasing and suggestive of the colouring of the sails in far less rugged and more smiling waters (Townsend 105).

If you have a memory of cutch or red ochre being used as a preservative of some kind, send me an email: dale@heritagenl.ca

This article is an excerpt from: