A Virgin Most Pure: A look at the Heart's Delight-Islington Christmas Carol tradition

What the book identifies as Carol #1 is a variant of what is known historically as “A Virgin Most Pure” or “A Virgin Unspotted.” A few online sources suggest that the earliest known version of the text is in "New Carolls for this Merry Time of Christmas" (London, 1661).

The first verse was included in the fabulously-titled “Wyeth's repository of sacred music. Part second. : Original and selected from the most eminent and approved authors in that  science; for the use of Christian churches, singing-schools &  private societies. : Together with a copious and plain introduction to the grounds of music, and rules for learners” by John Wyeth, circa 1813-1820. 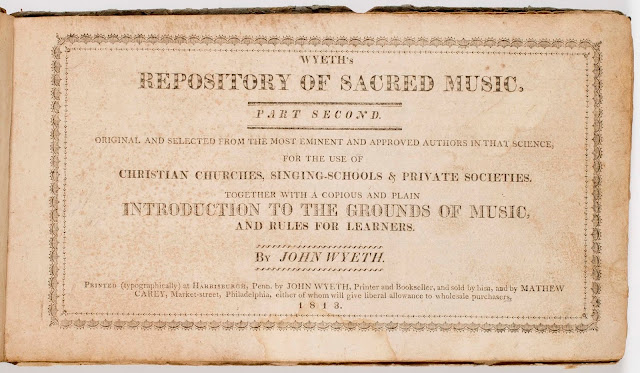 Below, you can see the Heart’s Delight-Islington version, and compare it with Wyeth’s first verse, and remaining verses which were included in a Maryland shape note song book published between 1800 and 1830. This combined version comes from The Second Penguin Book of Christmas Carols, by Elizabeth Poston, 1970. The Heart's Delight-Islington version is one verse longer;  the "Virgin Most Pure" version has a refrain which is repeated between each verse, which goes: "Then let us be merry, cast sorrows away; / Our saviour, Christ Jesus, was born on this day."

A virgin most pure, most pure behold
Brought forth our dear Saviour, as we have been told
For to be our Redeemer from death, hell and sin
From Satan's transgressions, the ruler of sin.

Near Bethelem City of Judah so fair,
Great multitudes of people together were there,
And they to be taxed as the custom ran so
Twas Caesar commanded that it should be so.

And when they had entered that city so fair,
Both Mary and Joseph together were there.
Their lodgings were simple; they beheld it no scorn.
By the very next morning our Saviour was born.

The King of all glory to this world now has come.
Small stores of fine linen to wrap him so warm.
Where Mary had a swaddling of a young son so sweet,
Down in the ox manger where she laid him to sleep.

Then God sent an Angel from Heaven so high
To give shepherds warning in fields where they lie.
Bidding them to be merry; drive sorrow away.
For our Saviour, Christ Jesus, was born that same day

Then shortly after a shepherd did spy
Great multitudes of Angels appeared in the sky.
And so merrily they were talking, and so sweetly did sing
All praise be glory to our Heavenly king.

A Virgin Most Pure

A virgin most pure, as prophets foretold,
Should bring forth a Saviour which now we behold,
To be our Redeemer from death, hell and sin,
Which Adam's transgression involved us all in.

Through Bethlehem City in Jewry it was,
That Joseph and Mary together did pass;
And for to be taxed when thither they came,
Since Caesar Augustus commanded the same.

But Mary's full time being come, as we find,
That brought forth her first born to serve all mankind;
The inn being full, for this heavenly guest,
No place there was found for to lay him to rest.

But Mary, blest Mary, so meek and so mild,
Soon wrapped in swaddlings this heavenly child;
Contented she laid him where oxen did feed,
The great God of nature approved of the deed.

Then presently after, the shepherds did spy
Vast numbers of angels to stand in the sky;
So merrily talking, so sweet did they sing;
All glory and praise to our heavenly King.

The book "88 Favourite Carols and Hymns for Christmas" printed circa 1830 includes the "A Virgin Unspotted" first line, and a different final verse:


To teach us humility all this was done
And learn us from hence haughty pride to shun;
A manger his cradle though He came from above!
The great God of Mercy, of Peace, and of Love.

If you have a memory of this tradition (or photos!) comment below or email dale@heritagenl.ca
Posted by Dale Jarvis at 3:06 PM