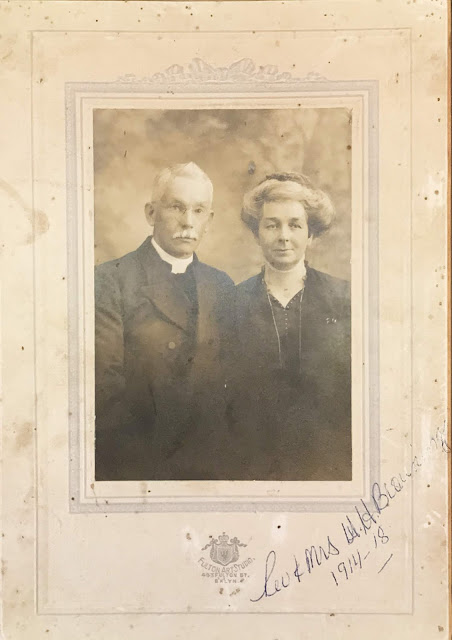 This photo shows the very distinguished Reverend and Mrs. William Henry Browning. While the photo bears the mark of the Fulton Art Studio of Brooklyn, it comes to us from the community of Bauline, Conception Bay, NL, where Rev. Browning served as Methodist minister between 1914-1918. Photo courtesy Town of Bauline.

Mrs. Browning was born Ellie Grace Currie, of Britannia Cove, Random Island circa 1869. They were married on July 18th, 1891 in Britannia, Rev TW Atkinson officiating, with David Currie (most likely her father) and JJ Durrant as witnesses. William was 34; she was 22.  Ellie's father David had come from Llanberis, Wales to work in the local slate quarries.  Today, the National Slate Museum exists close to the point from where the Curries emigrated.

William and Ellie had most likely met while Browning was working as a Methodist circuit minister, as he served a number of Methodist circuits around Newfoundland.  As an example, he is listed as officiating the Shoal Harbour marriage of Thomas Pond (28, a fisherman of Foster's Point) and Mary Eliza Benson (28, a "spinster" of Fox Harbour), though both of them were Episcopalian. He also served as minister of the Western Bay circuit in 1906-1910, where he officiated over several weddings. A new church was completed in Western Bay during his ministry. He served on the General Board of Missions, 1917-18.

Browning's obituary appeared in the Evening Telegram 1922-10-12: "Methodist Pastor Dead" and gives a more complete picture of his work and service:

Rev. W. H. Browning, Methodist Pastor at Hr. Grace, died early this morning from heart failure. William Henry Browning was born in England 1858 and was ordained in 1887, five years after coming to Newfoundland. His circuits since that time have included St. George's, Britannia, Petites, Random North, Little Bay, Fogo, Bonavista, Burin, Western Bay, Lower Island Cove, Pouch Cove and Harbor Grace. He held various offices In the Methodist Conference, for many years. In 1906 he was elected Secretary and in 1908 President of the Newfoundland Methodist Conference. He was frequently a delegate to the general conferences and General Board of Missions. An able administrator, a loyal minister of the gospel, a true friend, hundreds of his children in God all over the country, and in other lands, will mourn his passing. He is survived by his wife, formerly Miss Currie of Britannia, to whom the Telegram extends sympathy.