Newfoundland word of the day: Linkum (and where it comes from) #heritageNL 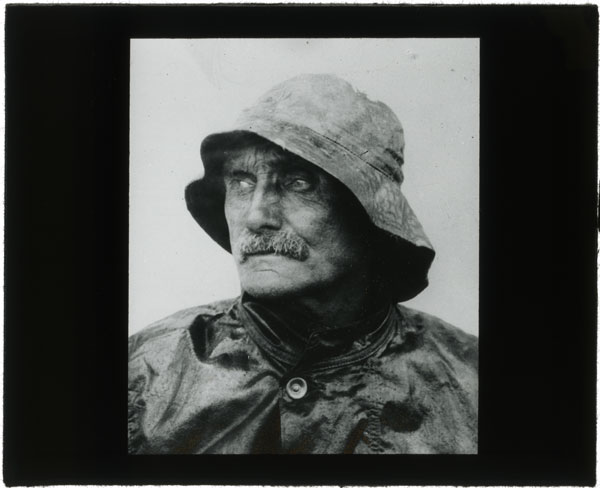 This fabulous shot of a gentleman identified as Uncle Abe Mercer is from the International Grenfell Association photograph collection of lantern slides in the holdings of The Rooms (Item IGA 13-58). The original photograph was taken in 1931 by Fred Coleman Sears, and shows a man wearing rain gear, with sou'wester hat, or what in Newfoundland English one might call a "lincoln" or "linkum."

Here is what the Dictionary of Newfoundland English says about the word:


1936 DEVINE 115 He sold. . .oil clothing, which was a specialty and included south-westers, Cape Anns and 'Lincolns.' 1937 ibid 31 Linkum. An oiled hat (sou'-wester) worn by fishermen. 1970 Wooden Boats 20 Those three shipwrecked men clung to the rock from Saturday to Tuesday, without food and the only water they had to drink was rain water they caught in a lincoln. 1971 NOSEWORTHY 217 Linkum. A large water-proof hat worn by fishermen with a strap under the chin, a small rim in front, and a flap on the back to keep the neck dry. 1978 Evening Telegram 9 Sep. p. 14 A linkum is an oil hat with a long back on it to protect your shoulders.

Waterproofed cloth garments were used in the North Atlantic from the late 1700s, and what we think of today as the oilskins worn by sailors and fishermen were originally made from sailcloth coated with tar. Traditional black or "tarred" Sou'Wester hats were developed in the 1800s, but replaced the tar with linseed oil and lampblack.

Scottish chemist Charles Macintosh patented a method in 1823 for binding two pieces of material together with rubber dissolved in naphtha, and the Mackintosh was born (the K was added later, apparently). But the rubber Mackintosh didn’t breathe, which made it unsuitable for certain types of work, and it stiffened when cold.

Gabardine was invented in 1879 by Englishman Thomas Burberry (founder of the Burberry fashion house) The original fabric was waterproofed using lanolin (and Burberry coats were worn by polar explorers such as Amundsen and Shackleton). It was a New Zealander, Edward Le Roy, however, who is said to have developed a more commercially-available (and yellow) material circa 1898, using worn-out sailcloth painted with a mixture of linseed oil and wax. This produced a waterproof, yet still breathable garment able to be worn in foul-weather conditions.

When a sailor's oilskins crack or get worn so that they are not waterproof, he oils them. They may need oiling two or three times a year. There are prepared oil dressings made for this use and pnt up in little tin cans. Some sailors use oils of one sort and another,and some sailors make a mixture of their own for a dressing. The sailor is likely to have a preference for some one brand of clothing and to stick to it. And he has his own ideas as to the best dressing for it, but he carries always with him a dressing of some sort. It is put on with a brush, the garments being hung up and painted with it.

But what of our linkums? Where did that particular word come from?

The catalogue and price list for Joseph H. Rowe & Company, manufacturers of genuine Cape Ann oiled clothing, horse and wagon covers, sou'westers and oiled hats, out of Gloucester, Massachusetts (circa 1892) note that their Lincoln Sou’ Wester retailed for $8 a dozen, though the catalogue advised that one could write in for discounts. The image below is taken from the catalogue: 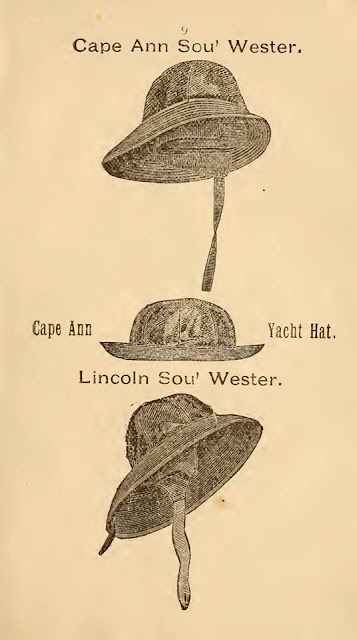 It seems likely that the Newfoundland word “lincoln” and its derivative “linkum” comes from the Lincoln Sou’ Wester, though why that particular style of Sou’ Wester was called a Lincoln is yet (by me at least) undetermined. The catalogue also offered for sale "Rowe's Prepared Oil" (at $3.50/doz) to keep your lincoln in tip-top shape, which was warranted to dry, soft and pliable, and free from tact. It came in pint cans with a patent screw top, for your convenience.

If you have an old linkum in your collections, we'd love to see it, and if there are people who remember the process of making oilskin, please get in touch! You can call me at 1-888-739-1892 x2, or email dale@heritagenl.ca