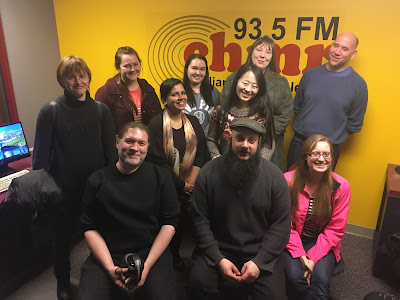 Starting this week, the Living Heritage radio show/podcast will begin a ten-week special series on the history and contemporary practice of craft in Newfoundland and Labrador. The series was created in partnership with the Memorial University graduate folklore course “Folk 6740 - Public Folklore” and the Craft Council of NL.

The Living Heritage radio show and podcast is a joint project of CHMR radio at Memorial University and the Heritage Foundation of Newfoundland and Labrador's Intangible Cultural Heritage Office. Regular host and producer is provincial folklorist Dale Jarvis

“Folklore students were paired with interview subjects, and were responsible for writing artist bios and show intros, preparing and discussing possible interview questions, and recording the interview itself in the CHMR production studio,” says Jarvis.

“The series was designed to give public folklore students practical skills in research, interviewing techniques, and the sharing of information on traditional and contemporary arts.”

The Craft Council of Newfoundland and Labrador represents 300 professional craft designers and makers in all parts of the province. The series showcases ten artisans and designers, and the premiere episode features an interview with Anne Manuel, a champion of craft in the province for over four decades.

Living Heritage Podcast is played twice weekly on CHMR radio 93.5MHz, on Thursdays at 6pm and Saturdays at 11am, Rogers Cable channel 942 and Aliant TV channel 825. A downloadable mp3 version of the series will be available each Thursday on the ICH blog, www.ichblog.ca, and through iTunes, Stitcher, or your favourite podcast app.