What is the "Topping Out" ceremony? #Work folklore for #FolkloreThursday


The Folklore of Topping Out

If you time it just right, and happen to be looking far up off the ground, you might catch sight of ironworkers hoisting a tree, wreath, or flag up to the top storey of a framed-out building. This is what people in the construction industry call “topping out” - a ceremony held when the last beam is placed at the top of a building. It is a piece of modern, occupational folklore that may have deep and ancient roots.

In his book High Steel Jim Rasenberger describes the tradition in this way:


“Topping out is an ironworkers’ tradition marking the setting of the highest piece of steel in a building or bridge. The beam is decorated with an American flag and frequently with a small fir tree as well. Despite the fact that the ceremony had long ago been seized by publicists and financiers as a photo-op, topping out was something ironworks took seriously. To be the foreman whose gang raised the topping-out flag was an honour.”


“No one seems to know exactly when or how it started, but the tradition of ‘Topping Out’ has become a cherished custom of Ironworkers whenever the skeleton of a bridge or building is completed. Topping Out is a signal that the uppermost steel member is going into place, that the structure has reached its height. As that final beam is hoisted, an evergreen tree or a flag or both are attached to it as it ascends. The nice thing about Topping Out is that no two ceremonies are exactly alike. For some, the evergreen symbolizes that the job went up without a loss of life, while for others it’s a good luck charm for the future occupants.”

Researcher John Robinson notes, “The topping out custom is most widely practiced in Germany and the Scandinavian countries. In Germany, where the custom is known as Richtfest, the ceremony consists of fastening a small fir-tree (or in some areas a wreath made from the branches of a fir-tree) to the top of the newly completed frame. Dignitaries are invited to make speeches, or recite poems for the occasion, and food and drink are served to the assembled workers and visitors." 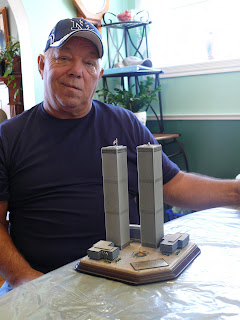 On 18 October 2012, folklorist Nicole Penney conducted an oral history interview with retired ironworker Joe Lewis, of Conception Harbour, Newfoundland, who had worked high steel, building a number of well-known structures including the twin towers of the original World Trade Center in New York City. He remembers topping-out ceremonies from projects he had worked on.


Nicole Penney: Tell me about topping out?

Joe Lewis: Topping out is when we're finished; like that's when everything is done and they'd throw us a big party for us - not a big party - buys us all pints of beer and sandwiches and we'll have a half a day just, you know, just doing nothing. Then we'll have a last beam and they'd put the American flag on it and we would write all our names on it, the whole job, then we'd bring that up and we'd set that, that's the last piece if steel that goes in that building, that's why it's called topping out.

Nicole Penney: Okay and was it always a flag that was put on top of-

Joe Lewis: That's all I know, I remember it was a big American flag.

Penney: Okay, so would that flag usually stay there for a while then?

Joe Lewis: It stays on that corner of that building wherever they put it, usually on a corner; it will stay there for a while and then we'll take it down and take it away.


Dick Conway is another Newfoundlander who worked high steel, who was interviewed by Penny and Dale Jarvis on 23 October 2012. He too remembers topping out:


Dick Conway: Topping out is the last piece of steel going up is the topping out and usually what you do with -- different places do different things, like here in Newfoundland you put up a tree. We worked on a German hanger down in Goose Bay, it was the first time I’d seen it, and the topping out, the last piece of steel went up, we were the last guys up, I had a crew up doing the decking on it, right, and before the decking went down, we had the topping out party and that’s what we did, we put up a tree, on the end of the hanger, and decorated it almost like a Christmas tree.

Dale Jarvis: So where do you think that comes from, that tradition?

Dick Conway: I don’t know. I guess again, coming back to the fishing probably, the flags. Because again you set the flag on steel, the flag is usually welded at the end of the steel, whichever flag of the country, United States or Newfoundland flag.

The origins of the ceremony are uncertain but may trace back to ancient Scandinavian religious rites of placing a tree atop a new building to appease the tree-dwelling spirits displaced in its construction. The tradition was clearly linked to the building trades in the English-speaking world by the 19th century, and in 1900, a correspondent named Alice Milne noted in the journal Folklore that “when the first chimney is finished he himself [the builder] will have to give the men a pint of ale apiece, after which they will hoist a flag on the roof-tree. If they do not get the ale, they will likely hoist a black flag, and perhaps even refuse to work.”


I’ll leave the final words to Mr. Ed Cray, who wrote the following in the journal Western Folklore in 1963:


“The ceremony has a solid basis in history. In ancient times it was traditional to appease the gods when a building was finished, sometimes with human sacrifices, also to exorcise any evil spirits which might have taken residence in the framework during construction. Bridges presented special problems and goaded the fears and superstitions of the ancients. John Warner of Bethlehem Steel found that Xerxes, the Persian military leader, blamed recalcitrant river gods for the collapse of a pontoon bridge over the Hellespont. To punish them the water was given 300 lashes and a pair of manacles thrown into the strait. In more recent times it became traditional to attach an evergreen tree or a sheaf of corn, flowers or a handkerchief to the final beam. At present a flag is usually hoisted to the top of the structure. Iron workers deny they're superstitious but they say it brings good luck.”

I suspect modern building inspectors would much prefer workers hoisting a fir tree to the top of a new building, rather than have to deal with the paperwork that a human sacrifice would create.

Happy Folklore Thursday, and good luck on all your new projects for 2018!

Melnick, Scott L. Why a Christmas Tree? A look at the origins of “topping-out.” Modern Steel Construction: December 2000.
https://www.aisc.org/globalassets/modern-steel/archives/2000/12/2000v12_christmas.pdf

Topping-out ceremony for Thales Germany HQ in Ditzingen
Posted by Dale Jarvis at 8:30 AM