Tales from Afar - Iara, the freshwater mermaid of Brazil. #FolkloreThursday 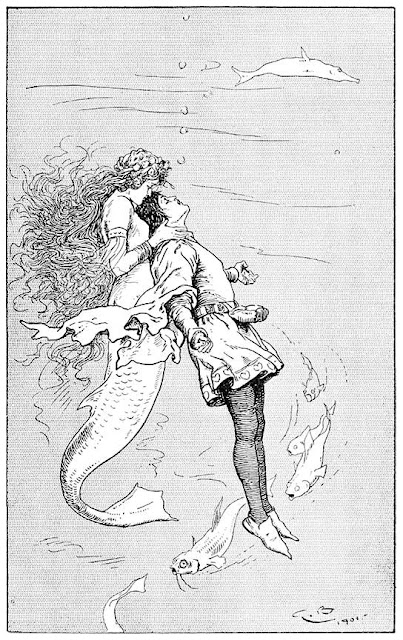 Iara, the freshwater mermaid of Brazil
As told by Sarah Nivea and Vinicius Tomé

Iara can be described as a freshwater mermaid. From the indigenous Tupi language: “Mistress of the waters”. Half woman, half fish, she lives in the waters of the great Amazon River, using her long black hair, brown eyes, indescribable beauty and voice. She usually baths herself in the rivers and her chants attracts the men who she wants to marry, dragging them to the depths of the rivers. The indigenous people from the Amazon region have such a strong belief in this legend that they avoid rivers and ponds at dusk. XVI and XVII Century writers used to depict the character as a male who would devour the fishermen, named Ipupiara. Later, in the XVIII Century, the legend changed, representing a seductive female.

According to the legend, Iara was the best fighter of the tribe and used to receive many compliments from her father who was the Pajé (Chief). Her brothers were jealous and planned to kill her, but Iara heard the plan secretly and killed them first. Frightened of her father’s reaction towards her, she ran away. Her father found her and threw her in the water between the rivers Negro and Solimões. Shortly, several fishes helped the lady and turned her into a beautiful mermaid.

Vinicius is a student at Memorial University, and Sarah manages Terra Nova Mandalas. Both are from Brazil. Image: Gordon Browne, Fairy tales from Hans Andersen.