Tales from Afar - The Frogs in the Bucket. #FolkloreThursday 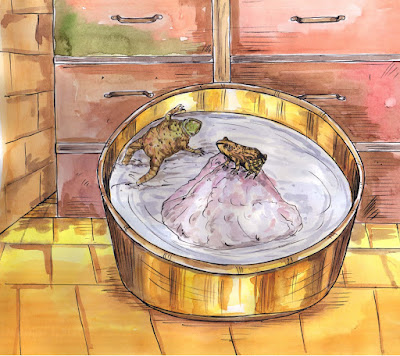 The Frogs in the Bucket
As told by Antje Springmann

But the other frog would not give up. And he kicked, and he pushed, and no matter how much he was ready to lose hope, he kept kicking and pushing, all night long.

And then in the morning, when the sun started to rise, and it just was creeping over the edge of the pail of milk, he suddenly felt something under his feet. And he realized that from all this kicking, he had churned the milk into butter. And there was a big lump of butter at the bottom, and that’s what he used to push himself out of the bucket. So the moral of the story is that you don’t give up, and that all of your hard work will come to something in the end.

Antje Springmann was born in Peine, Germany. At age two, she moved to Vöhrum, Germany and then emigrated to Canada at age twelve. Her mother was lured by a German book titled “Canada: The Land of Unlimited Possibility." The family first lived in Toronto, moved to Calgary, and ended up in Newfoundland. Image from Inspirational Stories.


How can I share a story?
Stories can be submitted in written form, or participants can sit down with a collector and record a spoken version of their story. To share a story, you can:
Posted by Dale Jarvis at 8:30 AM