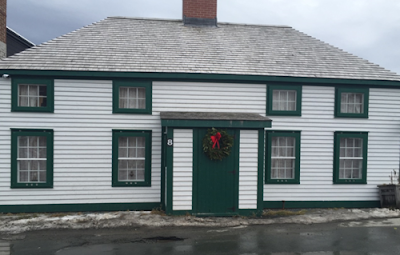 Mallard Cottage is located in Quidi Vidi, a historic and quaint fishing village just outside of St. John's. Mallard Cottage is an eighteenth-century Irish style cottage with a low-hipped roof and centrally located chimney. It is one of the oldest wooden buildings in North America, and has been recognized as such by National Historic Sites of Canada.

The building was a private residence and home to the Mallard family from the late 1700s until the 1980s. After the Mallards left, Peg Magnone took ownership of the property and operated an antique shop from the premises. In 2011, Mallard Cottage was purchased by Todd Perrin, his wife, Kim Doyle and Stephen Lee, and has since been transformed into a restaurant. They modernized the cottage as per necessity; adding plumbing and electricity, but they were careful to remain true to the historic nature of the property. 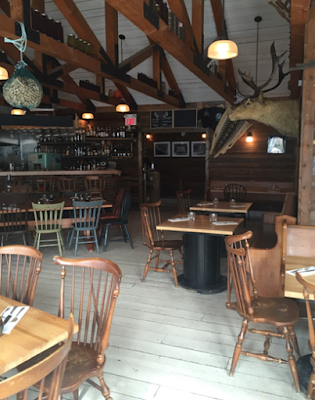 Head chef and owner, Todd Perrin, prides himself on cooking with locally sourced meats and produce. He cooks traditional Newfoundland dishes by using local ingredients. They have a garden where they grow produce for the restaurant, and they do a lot of in-house butchery. Todd explains:

"I’m a lover of Newfoundland, I’m a lover of Newfoundland food, I’m a lover of old buildings, and wood, fireplaces, all that stuff. So, basically, Mallard is a representation of all the things that I like . . . I wanted people to feel like they weren’t going to a restaurant. I wanted people to feel like they were coming to my house for dinner. So that idea of comfort . . . everything is just where it is because the guy who owned it, that’s where he wanted to put it, and that’s what this place is." 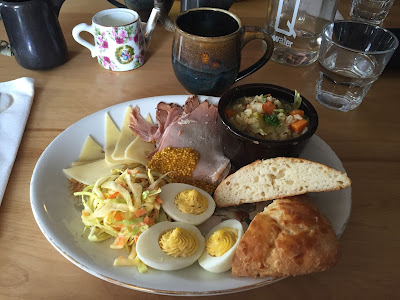 I've eaten at Mallard Cottage on various occasions for both brunch and supper. One of my most recent visits, I had the ploughman lunch (pictured above) which consisted of ham, devilled eggs, homemade bread, coleslaw, cheese, mustard and turkey vegetable soup. We ate sitting by the fire, drinking coffee from locally made pottery mugs, feeling as though we were visiting an old friend. A trip to Mallard Cottage is worth it for the architecture alone, and the delicious food is the icing on the cake. Speaking of cake, be sure to check out their cake table when you visit. 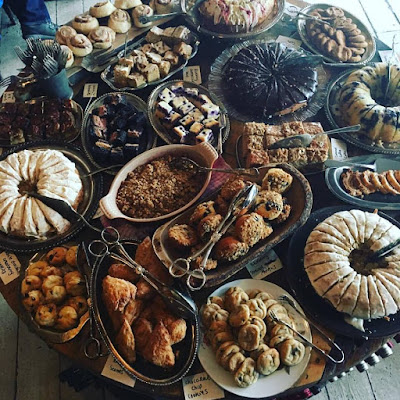 I definitely have to visit Mallard Cottage. There's so much history there. The food looks delicious. Very much enjoyed reading your blog, Katie.