When Terra and I were in Port Blanford last week, I noticed a sandwich at the Memories Mug Up that I had never seen before. It appeared to be the most popular sandwich at the event; the tray having been more or less consumed before any of the other typical pot luck sandwiches. It's innards were bright orange, and so, obviously, I had to enquire as to what it was. 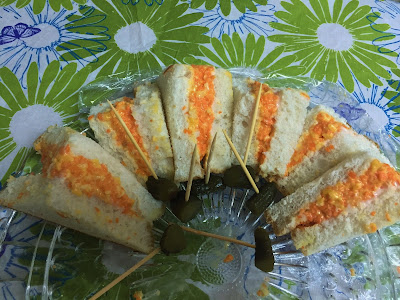 Linda Bennett explained that this sandwich is composed of grated carrot and cheese, finely chopped onion and mayonnaise. Apparently this recipe is particular to Port Blanford.

According to local lore, Betty Greening, a World War II bride brought this recipe with her to Port Blanford from Scotland. It has since become a well-known sandwich among the locals.

Have you ever consumed this sandwich? Is there a particular name you've associated with it?

I used to take sandwiches like that - on pita bread - for lunch when I was in high school, quite regularly. Only I'm not from here at all. I didn't know anyone else who ate them - it was a concoction I somehow dreamed up myself. I think I might have put in a bit of apple, too. Kind of a variant on apples and cheese, in sandwich form. They were good!