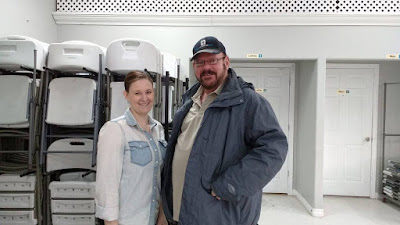 Keith Hillier was born in 1954 and grew up in Campbellton Notre Dame Bay. Today he is retired and lives in Portugal Cove-St Phillips. His mother, Violet Melina—known as Lina—was from Shoal Harbour and his father, Wesley George Hillier—George—was from Campbellton. They met when Lina came to Campbellton to teach school. Her family was well off with her father serving as the Roadmaster for the Bonavista Branch of the Newfoundland Railway. This afforded Lina the chance to attend the Normal School in St. John’s for three years to train as a teacher, more training than many teachers in Newfoundland and Labrador received. George Hillier was a carpenter originally working in the lumber industry building camps and later building public buildings in Central Newfoundland.


Father was a—well, when he was younger he worked in the lumber woods, and then he, I guess he was recognized in there at building camps and what not, as being a very good carpenter or whatever, so eventually he wound up being a carpenter and being foreman of a crew of carpenters, building hospitals schools, churches, and apartment buildings and whatever in the Central area.

He [George Hiller] didn’t work home, he worked in Buchans most of his life, which is, now is probably an hours job, but back then when it was gravel roads it was probably three hours drive from Campbellton…. But he didn't come home every weekend, he only came home, sometimes he came home every weekend sometimes he could go months. And, I kinda think, way back, when times weren't as good, he probably may have been away as long as six months at a time. Which is not uncommon around Newfoundland—if you left the place you were living in to work. So what was that like growing up with him gone. Well you know if you grow up without something you really don’t know you don't miss what you didn’t have

Emma Lang (EL): Any particular reason?
KH: I don’t know what the reason would be, I was too hyper to be sitting in a seat for hours. It wasn't interesting. I mean, the subjects that were taught in school, I can't say that any of them interested me that much. Geography was perhaps the, geography and math was perhaps my most interesting subjects. English and French and history, if you had to read, I wasn't that interested in it.

EL:…what would you have rather been doing?
KH: Well I've always been a person that's been hands on and I’ve been very involved in a lot of things that require use of your hands, more creative. What would I have been doing?... I was fascinated, when I was growing up, the woman across the road used to sew and she had a sewing machine. And it was one of those where you put your feet on it and it goes around like, goes up and down with your feet. Now, I was just fascinated with the thing on the sewing machine bobbing up and down. I would sit on the corner of her daybed, you know? Right here going along and see her sewing and watch that for hours almost. But anyway, I became interested in sewing,

Mr. Hillier attributes his interest in sewing and cooking to his own creative interests and to exposure to these crafts he received while spending time as a child with his grandmother and mother.


I had a grandmother lived next door to me, so she was always into the, we'll say the women's stuff, and my father was away so I didn't get much exposure from him to the more manly stuff. But even if I did, I wouldn't have, perhaps been interested in it anyway. because, you know I just have a more of an interest in arts and crafts types things and wood working, once I got older, where I could have tools and buy the wood and what not. so, I became interested in carpentry work and I’ve been interested in it perhaps more so than anything for the best part of my life. I've been involved in renovating houses and building houses and that type of thing. but when I was a kid I was more involved, and I was interested in cooking and being in the kitchen and I’m still interested in all that.

Mr. Hillier taught himself how to sew, he said with a big laugh, “my mother couldn't sew on a button, right! she was more of a cooker and baker that was more of her thing and that what she enjoyed doing most.” But she was willing, with some prodding, to help him pursue his interests.


…we didn't live in a place where there were stores. It was a small town. There were stores, but you’d order a lot of things from catalogues. and I’d want her to be ordering fabric from a catalogue so that I could make curtains, say, or drapes for a bedroom and if I kept on enough, [laughs] and nagged enough [laughs] it just might happen.

Today Mr. Hillier lives in a house with drapes he made himself, and continues to make things by hand.

This interview was conducted as part of a Collective Memories Mug Up project conducted by Memorial University students enrolled in FOLK 6740: Public Folklore, Winter 2017. If you would like to listen to the full interview click here.
Photo: Julie Pomeroy, Town of PCSP, with Keith Hillier.

This was written down from an oral interview that I did a year or so ago. I am truly a Newfoundlander and at the time of the interview, I had no idea that it would be transcribed onto paper and put on the internet, much the same way as I was speaking to the person interviewing me. I hope that those who read it can understand what I am saying because it sounds terrible.