“There were ghosts around Goat Cove" - Interview with Ruth Bugden 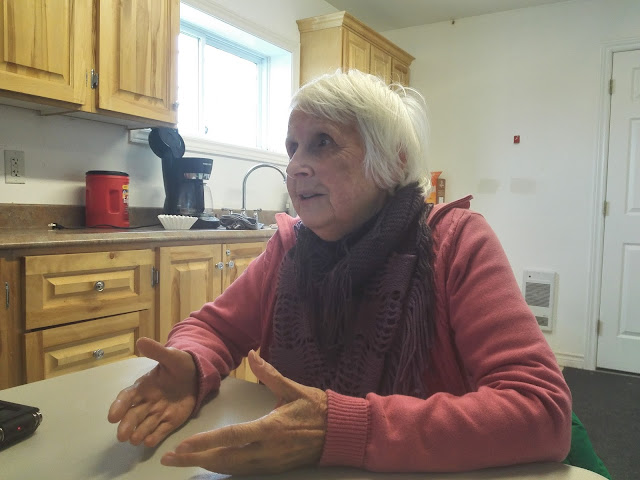 Portugal Cove-St. Philip's Memory Mug Up
Ruth Bugden, interviewed by Tanyan Ye
Born in 1944, Ruth Bugden has been living in Portugal Cove all her life. She grew up here, got married, and now her whole family, including three children and five grandchildren, are all living in this area. Her maiden name was Allen. Her father was born a Harding but raised by the Allens, and her mother had a similar story—she was born a Squires but raised by Piccos and then married to an Allen. That is because in the past adoption was more common and less regulated, as Ruth said, “Back then, you didn't have to go through any red tape. If a child needed to be looked after, somebody took it and that is the end of it.”

Though she grew up in Portugal Cove, she went to school in St. John’s. This explained why she does not have accent of the community, which she felt a little regretful. When she was three years old her whole family moved to Windsor Heights for a while where her father worked in a farm. That is why she went to school in the city instead of in Portugal Cove. When she was about ten her family moved to where they are living now, but she did not want to change school. Besides, if she continued going to the school in the city she could take bus but she would have to walk if she changes to the school in the community. Therefore, she finished her school in St. John’s.

During the interview she shared with us many interesting supernatural stories, some of which were what she herself or her mother experienced. When asked why her mother and herself tended to be more sensitive toward those things, she told us her mother used to be a healer, who was believed to be able to cure small diseases, or as she put it, “keep the warts away.” She also explained why she was able to cure people: “One of the things they say, if you never saw your mother…My mother never saw her mother. She was born and taken right away.” She herself was a caulbearer. As she said, there is a lot of superstition about caulbearers. “[it makes you] safe at sea, and you will do great things. So, I don't know what great things I have done. And other superstitions too about having special power, whatever.” She said, laughing and teasing that she believed she had special power.

She also shared with us her memories of the old days, such as dinner theatres. She was a leader of the girls’ group in the community, and they used to play a lot of those theatres. When she was teenager, the girl’s group was very active; they did a lot of volunteer work, organized parties for the senior, etc. She also talked about the transportation, family life, and school life back then. As a person living in the community for her whole life, she is familiar with stories circulating there as well, which she willingly shared with us as well, such as the love story of Fanny Goff. From her memories and stories, we can see how much the life in the community has changed; yet, the lovely parts of the old days remain, at least in our memories.

“There were ghosts around Goat Cove which is in the area of Beachy Cove School. And at some point at around 12 in the night you aren't supposed to be able to get through over that but my dad came, you know, courting my mother, said he purposely walked that way at 12 but he never did see anything. However, I have a mother that's been very, very sensitive toward these things and had a few experiences. She at one time visited who she called Granny Talker, and I wish now I knew exactly where it was but, she went to stay at Granny Talker's house, and when she got into the bed, she, just got into bed, and they closed the door, and, God, and these hands came out at her throat and she screamed. And the old lady came back in, talked to her for a moment and said ‘Don't worry my dear it is not coming for you.’ And, she found out after that somebody had died there or got murdered there or whatever, so. There's few things like that, there's few little things.”

“I have a couple of experiences with tokens, tokens of death. Just to let you know I was wide awake when this happened. My husband was a collection officer, and he had to go to work at 12 o'clock in the night so I was wide awake about 11 in the night, waiting to call him up to get him to go to work. I was sitting down knitting and my backdoor started to rattle, and my backdoor, I tried that after, my backdoor would not rattle. I could not get a rattle out of it. And there was rattle, rattle, rattle, rattle, rattle. And I went out, and there was nobody there. So my mum lived next door 'cause we built our home in the family property. And so I called over to her, and I said "Mum, did you hear anything or see anything?" And my uncle Will that I was very close to was in the hospital at the time, and she said ‘Don't worry my dear.’ She said ‘That was just Uncle Will coming to say goodbye.’ She said ‘He just walked around this house.’ And I thought ‘Ok.’ Right? And so within minutes the phone rang and it was Uncle Will's daughter saying her dad had just passed away. At the same time, he had a sister in New Brunswick, and she was walking up the stairs, and met him coming down these stairs. So, a lot of stories like that.”

“The Anglican church has moved now, but where the old church was, you have to come down the lane and go over the bridge, the bridge by the monument. And anybody living down in that area if they were coming from the united church, they would also have to come and go over the bridge. And some mornings, rarely, it didn't happen on a regular basis, but the congregations would get out of church at the same time, and they would meet on the bridge. And every time that you met on the bridge, somebody die during the week. And it happened. And you know, well, it doesn't happen now but right up until the time that the church moved, it was still happening. It did. 'Cause every time somebody would mark, you know, would mark it, "ok, we are gonna have a death before the week is out." And it always did.”

“Fanny Goff, Pheeny Goff, her name was Tryphena, and she was called Fanny, she was called Pheeny. But that was really interesting and it really happened, and I did a lot of research on that because I worked with a teenage girls' group down to the church, and our group is actually over 50 years old and, I hate to admit it, but I have been with it since it started. I was only a teenager, thanks. But we actually, we searched it and wrote a play and did it as a, almost like a little dinner theater. Then we do dinner theaters all the time down there now, our group girls. But, yeah, she was about to be married and it was this man from Brigus. I guess, Portugal Cove was kind of the hub back then because it had the first road that came from St. John's, and with Bell Island and the boats and everything, and the ferry, the bay, so I guess people were here for various reasons. I don't know how they met, but they planned to be married. And, so the day that was back in, I think it was 1823, so he was coming in couple of days, obviously before and she got really ill, and I guess no way to get in touch with him at that point, we didn't have the telephones. He was coming through the way they know, and stopped at his friend's in St. Philip’s, on the way down there was a man named Bill Squires, and only would be told that she had just died.”