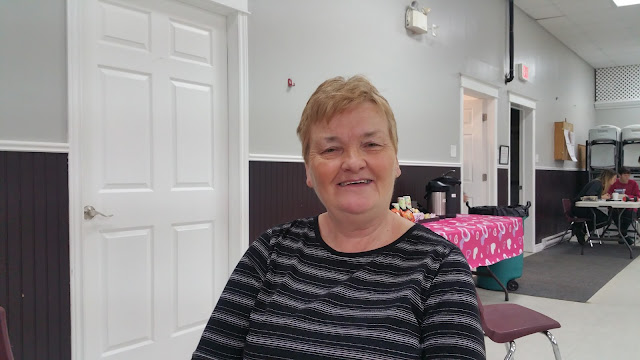 
Palma was eager to get started at the Portugal Cove-St. Philips Memory Mug-up at the recreation centre. She was the first to arrive and had her hands full with old photos and a book of happenings that she found among her late father’s things. “Unfortunately, two pages are gone,” she said of the book from the 19th Century. Events of Newfoundland was full of community news-stories that had Palma smiling while I read it out loud. She takes pride in being born and raised in the seashore community, saying “I’m from Portugal Cove and never left – the only way I leave now is when I die.”

Life on ‘The Cove’ has been good for Palma (née Harding), who grew up on Harding’s Hill, an area of the community that has hosted her family since 1750 when the first Harding arrived in Newfoundland. As the family grew, so did their homestead, though they all remained close by. Palma, born in 1950, remembers the long conversations she used to have with her great-grandmother and how her father built their house himself.

Through our morning together, Palma shared with me some amazing memories that demonstrate the strong ties her family has to Portugal Cove and a certain historical richness she feels through them in the area.

“We never suffered hardships…my father always went to town and whenever he’d come back, he always brought me back a new dress…and I’d wait for him.” He did this quite a lot.

About her father, she says, “he was a very interesting man – he could tell some stuff too.” He worked construction down at the American military base and later drove a cement truck. About ‘The Cove’, she says, “he could go way back!”

“Oh yeah,” Palma’s husband agreed. They came to the Mug-up together, but he wanted her to be the focus.

“There were good wages back then,” she said of her father’s work and in turn, her upbringing. One advantage that Palma had growing up was that her father always had a car -- and always had a nice car. But needing a car can be another story altogether. Palma, an engaging storyteller, tells it like this:

“The house just up from me was a small bungalow. There was still a lot of snow left on the ground. So, me [and] my brothers, somehow managed to get up on the roof of the porch and jumping into the snow for fun, right? So, I had to jump -- and break my leg. Yeah, I got to my fear of heights that day, that’s where it comes from. But anyway, I had to wait all day for my dad to take me to the hospital. I had to wait the whole day, I never forgot that. My leg on a chair…I was screaming in pain. Anyway, back then you were put in the hospital. I was put in the hospital for two weeks for that…I had two brothers so [my mom] couldn’t stay with me, so they had an orderly sit by my bed every night…A cast on and a big old slipper on that foot…I got a terrible fear of heights.”

We found out then, that Palma had, in fact, left ‘The Cove’ at least once, and she laughs about it now, but this was 1958 and she explains “there were no taxis…I had to wait for my father to come home.” This was also during a great storm where much of the area was without power for two weeks – but they had a generator.

Palma’s father played into her stories a lot and him having a good job in town afforded her and her younger brothers other luxuries that were rare at the time. “We were one of the first with a television…one of the first.”

Summertime made for different fun growing up on Harding’s Hill on ‘The Cove’. It was “the spot.”

“We used to go [up the hill] and explore…we’d be gone all day…and go get some money and get some candies…then mom would call us for supper.”

“We’d pile-up on Harding’s Hill, that’s where I grew up, it’s named after my family, and we’d play everything over there because there wasn’t much traffic going up and down. If there was we’d just move to the side and the cars would go back and forth. We’d play hopscotch and ball…softball…baseball. I’d be the only girl…and there would be six of us and my two brothers, and basically I’d be looking out for them too.”

But “looking out” did not necessarily mean keeping them, and herself, out of mischief:

“My [neighbour] was a fisherman, so at that time he had flakes there, they were called. He’d lay the fish out to dry in the sun…someone…anyway decided we’d take a few fish…and at that time in the backyard was a big old garage with old batteries and whatever. And we were trying to figure out how to set fire to roast the fish…Anyway we set fire to the battery…we got matches from somebody…somebody was a smoker or whatever…all to roast a fish, right?”

Or, there was the time she left her brothers while they got into it a little deeper at another neighbour’s house:

“The father used to have a backroom that he had all his old beer bottles in…I’m going to get in trouble for this one…But my cousin Doug and my two brothers decided they were going to take the bottles…and there was a snack store just down the hill…Siskin’s Store…So they went in…I don’t how much they got for them…They sold all of his bottles! Well I’ll say they were in trouble that night...I don’t know if they gave the money back to the man…I mean back then, that was a lot of money…For some reason, I didn’t want to get involved…mischief, right?”

Palma had so much to share, and really enjoys telling stories about her family, and food, and all the fun she had growing up in the area. Her tales are rich with imagery, full of real history, and reflect a beautiful life held with warm memories.

This interview was conducted as part of a Collective Memories Mug Up project conducted by Memorial University students enrolled in FOLK 6740: Public Folklore, Winter 2017. If you would like to listen to the full interview click here.