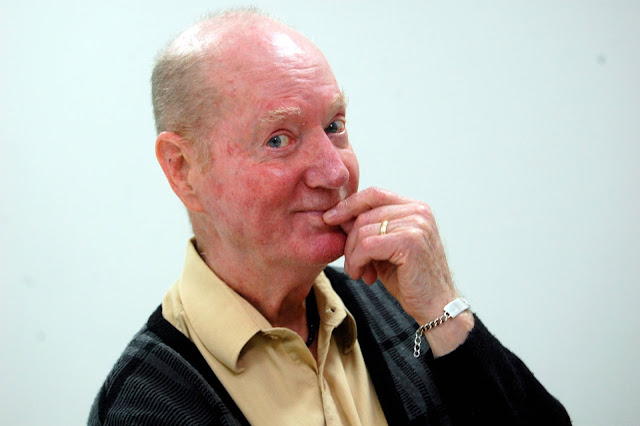 Clarence (Mac) Miller is a lifelong resident of Portugal Cove – St. Philips, NL. He was born September 19, 1943. Mac Miller is the only son in a family of five children. As a child, he often accompanied his father who worked as a truck driver supplying goods to boats for Bell Island. He married in 1968, having growing up in the same community as his wife. He has two daughters and is “waiting for grandchildren, still waiting.” Mac Miller worked in public utilities for 35 years, and is now retired. His interest in history and geography started as a schoolchild, and he began his own research in his family genealogy which led him to become a local Heritage Committee member.

Mac described the work associated with growing up in a family of girls:
“Otherwise there wasn’t much time for entertainment so to speak, because when my father worked on Bell Island, I had to come home from school and get all the supplies for the night, I had to get splits, small pieces of kindling for lighting the fire in the morning. I never had too much time for sports. When I did, that was mostly at school, playing baseball, soccer. Some Saturdays when my father wouldn’t be at home, when he would go to Bell Island on a Monday and wouldn’t be back until Friday night, and I being the only boy, I had to do all the work. Sometimes coming home from school I used to have to go in the woods, which was about a mile hike cut a few sticks of wood, haul them back, physically haul them back to the house about another mile, and cut them up for a day. Some Saturdays we had to cut up enough wood for the fire for the whole week, which didn’t leave much time for anything else: stealing vegetables out of the gardens or anything else like that, right? That’s about it for me.”

Mac: “I didn’t like my siblings, they were all girls. They didn’t like me either!
Nataliya : You had a hard time!
Mac: I did have hard time! [laughter] They got away from everything. That is why I had to do all this hard work, go to get firewood,and so on. Girls didn’t do that stuff. They would be stuck inside the house, while I was outside in the cold at everything else. Well, my five sisters, we all went to school here in Portugal Cove. Finished high school there. I was the only one who did, as they say, post-education. I had one year at the University, but I didn’t like that. And at about nineteen years old I went to work, and I stayed at that job for 35 years until I retired.”

Although there was a lot of hard work Mac also recalled some of the games and activities he would play as a child:
“In summer when we had holidays, we used to play soccer. we played baseball a lot. We used to grow our own vegetables too, fish every now and then. We weren’t a fishing family but every now and then you would get out with someone in a boat, jig a few codfish for the week. We used to play some games. One game we used to play is tiddly. Different places you go in Newfoundland, they call it by a different name, right. We called it tiddly; we played with a couple of sticks. I actually had a real ball to play soccer with. Can you believe that? A real ball. We went swimming. We would walk over hills from Portugal Cove about a mile hike to go swimming in the ponds. […] So, we used to hike over hills almost every day in summer or on our holidays. Go for a swim, then come back home again. We used to spend a lot of time around the rocks, we used to call them rocks, or a shoreline. Jigging connors, sometimes you would get a small codfish that used to be in around the rocks, fry that on the rocks. One thing I remember that we used to do. Do you know what conk is? Seashell that grows on a rock. We call them conk, right. They are males and females. We used to go down on the shoreline and pick those off the rocks. Pick the male ones off the rocks, because the male ones are bigger and fatter. We put them in an old tin can, and make a little fire. We boiled them and ate them. They were lovely! They were actually really lovely!”

“My friend had a horse. Of course late in spring of the year and late in fall of the year you had to cut a grass, let it dry, put it to a barn for the horse in the winter. That used to be good because once we got the barn full of hay we started jumping in the hay. If you were warm at all, if you were sweating at all, you itch like anything. It was fun, but at the end of it you almost wanted to walk another ¾ of a mile to the pond to go for a swim. We used to swim in the salt water too. Saltwater is a lot better to swim in because saltwater is heavy and fresh water is not. We used to get in saltwater, and just float. We get on our backs and float. Saltwater will keep you up. In fresh water you have to move your hands and feet just to keep in that same position. I remember one place called Claire’s beach. It used to be a beach of a family Claire's that lived there. I remember myself and this other guy were swimming once and we were out twenty feet in the water, and we saw this tail come up in the air, out of the water. It was a shark about thirty feet from us. That was closer than I’ve ever been in all the time I spent swimming in saltwater to something chasing us so to speak. Here was this shark. We got out of water pretty fast.”

“I live more in the past than in the future or the present. I always did. When I was going to school, history and geography were my two passions. Especially history. For some reason, I don’t know why you get hooked on something […] I think it was just about how the things were back that then, what they did and so on. […] I don’t know, just an interest I had… why someone becomes a hockey player, what made you become a soccer player. It was just something I was interested in, it was just in me for some reason. Then I just kept at it, and at it, and at it, it just got more and more challenging. Then I got into family history, and it was fine, doing genealogy. Not even one thing in particular, but the overall thing, history, how did this come about.”

This interview was conducted as part of a Collective Memories Mug Up project conducted by Memorial University students enrolled in FOLK 6740: Public Folklore, Winter 2017. If you would like to listen to the full interview click here.
Posted by Terra Barrett at 8:30 AM