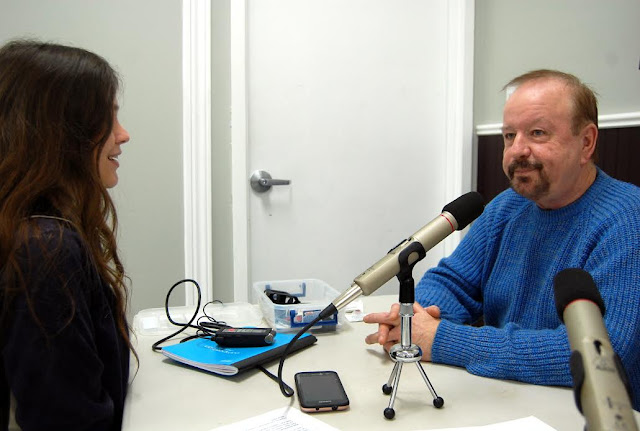 Wally Pynn, interviewed by Jill Jablonski
It was in Fox Point Newfoundland in 1953 that Wally Pynn was born to a Principal Lighthouse Keeper and a family of musicians. Wally’s family began to value music in the twentieth century after tragedy struck. It was in 1910 when Wally’s grandmother’s childhood home burned in a fire. The children, with no father and no house, garnered the concern of Dr. Wilfred Grenfell, a man who came to Newfoundland and Labrador in the 1880s to provide services to people of the province. Dr. Grenfell took the children to an orphanage in St. Anthony where they were provided with shelter, food and an education in music, which Dr. Grenfell personally fostered. “In fact, he sent two of my relatives to somewhere in Kentucky to study music for a couple of years. And they came back, and anyways, they’re known for playing the organ and piano in St. Anthony” Wally recalls, proud of that heritage.

Wally, who has played a tune or two during church services in Portugal Cove, learned to play the piano and pipe organ when he was a child growing up in a lighthouse with his mother, father, and four siblings. With four siblings and five cousins, who lived close by, Wally never was in want for entertainment. There were games to play, music to learn, and chores to do. One of those chores was berry picking:


I didn’t like picking berries so much. My mother was an avid berry picker, and uh, my uncle’s wife who lived on the lighthouse as well, they loved berry picking. We used to have to go berry picking with them in the fall. I used to hate that. But uh, I love berry picking now. It’s interesting, yeah. We’d go over on the Cape, which was just on the other side of the lighthouse. Lots of bakeapples used to grow there. . . It’s a marsh berry. I like them, and my goodness. We’d go away and, on the Cape, and oh in a day I suppose, we’d pick three, four, five gallons of bakeapples. It was just a lot. Yeah. And, uh I don’t know, lunches were always molasses bread it seems. You know. Butter and molasses bread, and come time to take a break, we’d all sit down by this, you know, little brook. I don’t think the brook was running. It was just a bog, and we’d scoop our cups down into the, we wouldn’t have milk or pop, or anything like that, we’d just have an old glass of cool water, and we would scoop up the water, and have it with molasses bread, and I don’t know. It just seemed like the best snack in the world. If we were lucky, though, Mom probably, probably would bring along a box of cracker jacks, or chips, or something like that. But we just loved cold water and molasses bread.

Also filling his time was school, which was located on the other side of a graveyard from his lighthouse. He never saw any ghosts in the cemetery, and he never felt as if the lighthouse he called home, was really haunted. Instead, it was a warm place that overlooked the water that his grandparents made their money from, as they ferried people to and from their destinations on their deck boat:


My grandparents. They owned what we called a deck boat, it wasn’t a yacht, but it was along those lines. It was a big deck boat, and because there were, no roads that connected the communities on the Northern Peninsula until the mid-sixties or something, my grandfather and my grandmother used to ride people around, take people around to various communities, like the doctor, the nurse, the dentist, social worker, and all those people. And each trip, say the social worker had some work to do in Main Brook, which was sixty miles away, or whatever. They would pay my grandfather twenty dollars to take them around. So he did that, my grandfather and grandmother did that in retirement, and would take the rangers around, the policemen, used to call them rangers back in the day. So I remember I would be sitting on the cliff, or standing on the cliff. Me and my cousins, you know, waving at the deck boat, Grandmother and Grandfather going by, cause we knew we would get a quarter at the later end of the day. They would come into the wharf, and we would go down to meet them and stuff. And my grandmother was the most wonderful person in the world. Just the sweetest darling, and guaranteed, whenever we saw Grandmother, she would have this big purse full of change for her grandchildren, and we would get a quarter. But anyway, just to see, I can hear the boat too, just passing by the lighthouse, “oh there’s Grandfather and Grandmother coming in today” and “they’re leaving now”. They would have those people, those people that were required, for whatever reason, in other communities, it was the only way to get there, you know, take them by boat. Because there were no roads, or anything that used vehicles. I think the road didn’t go through the Northern Peninsula until 1966, and uh. So yeah, that’s what they did in their retirement. And just to go onboard the deck boat was so nice. Grandmother had a nice little stove on there, and she would make little pies and little buns, that kind of stuff. The boat would be tied to the wharf, and we would play cards together, and read stories, and go down and visit them, and that’s all nice. That’s certainly my best childhood memory.

Others thought Wally's home was lovely too. One man even stopped and near the Pynn's hen house, and began painting a picture of the lighthouse. This man’s painting inspired Wally, who as soon as he found some cardboard and paint, copied the artist as well as he could, and painted the lighthouse too. Painting is not only a skill to Wally but a comfort, just as his wood carvings and writing is. One might ask where he gets his inspiration from. The answer is a combination of past and present. Memories of the graveyard, of berry picking, his love of family, and music, they have shaped and inspired him. But the quiet serenity of Portugal Cove, the rolling hills, greenery, the lap of the water, and Beachy Cove. They are his current sources of inspiration.

I enjoyed this very much this morning,,, a great read,,,
Thanks so much.. love to hear stories especially about my grandparents from Raleigh.