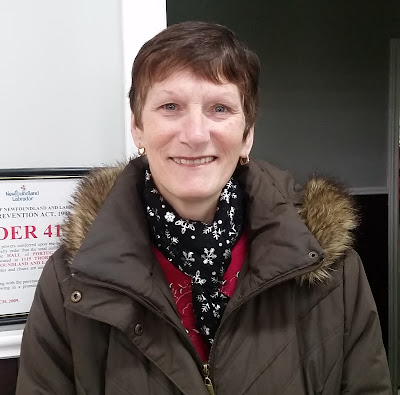 Delores Susan Mitchell, nee Greeley, was born January 3rd, 1957, and has lived her entire life in Portugal Cove. Her mother, Annie Violet Roberts, was a “townie” from St. John’s and took care of the home and family, and her father, Leonard Greeley, was a labourer for Stokes. She lived with her grandparents Archibald and Suzy, nee Churchill, in North Point until the age of nine, when her parents built and moved to a new home further down the road. Mitchell fondly remembers her heavily tattooed grandfather that had a story for every mark and was in charge of local grave digging, and her grandmother who would always favour her as the only girl and often treat her when making a trip to “town.”

North Point, or “The Geeze,” was isolated compared to the rest of Portugal Cove, and so they were often left “off to themselves”. Most of her memories growing up a tomboy, living with four brothers, or playing with some of her closest friends, Joselyn Churchill and Sylvia Greeley. When not in school, Mitchell recalls spending most of her time outdoors and “making their own fun.” During the warmer months, she recalls playing softball, skip rope, hopscotch, hide-and-seek, and spotlight. In the winter, they would go sledding in the meadow behind her house, and if there was freezing rain, skate down the hill. Everyone would get around by biking or walking, and if they were to go to “town”, St. John’s, they would have to take the bus.

Mitchell recalls holidays and special events amongst family and friends dearly. During Christmas time, she remembers her father and members of the community mummering, and on Christmas Day many people constantly stopping by. What was particularly exciting for her, was when Santa Claus visited on Old Christmas Day (January 6th). On New Years Eve, her family would wait in front of the television together until midnight struck, and her father and grandfather would go outside to shoot their guns with the rest of “the cove”. Amongst her friends, Halloween and Valentine’s Day were the most exciting. During the latter, children would leave anonymous valentines at each other’s doors. Amongst her family, Pancake Day (Shrove Tuesday) was particularly fun because her mother would hide coins, nails, needles, buttons, or her own wedding ring in the cakes, each granting their own prediction for the future.

In the neighbourhood, she recalls there being a woman who read tea leaves and ward off warts, a man who could stop blood, and the “cat man” who lived alone amongst an abundant amount of felines. Just up the road from her were two grocers, Hibbs’ and Churchill’s. For every other need, they would have to catch the bus to St. John’s.


ON BEING THE ONLY GIRL

“One Christmas, Santa had left me a beautiful walking doll. Let me tell you, she was a big doll and she looked real. She was beautiful. Well, the boys got their hands on it and glued her eyes shut. It broke my heart. I could never get her eyes open again – I was devastated. I kept her, of course. I could never have anything. I had a stroller, a doll, child’s stroller, and they took the wheels off of that to make a buggy for themselves, oh my… But no, I couldn’t have anything. Everything I had they destroyed.”

ON HER FIRST TEA

“I remember my first cup of tea I had as a child. My grandmother poured some in a saucer because it was hot, and I would blow on it to cool it down, and drink it from the saucer so I wouldn’t burn my lips. Loved it and I still drink tea today. She got me hooked on tea.”

ON LACK OF FEAR

“When we had a lot of freezing rain and it was really cold, we would put on our skates and we could skate down the mountain. And I remember one year, I lost total control coming down over the mountain, and I went through my neighbour’s fence. I was hurt, nothing broken thank god, but I did get hurt. I was in bed for a while. But we had no fear.”

“They do Valentine’s different now. We used to make out our valentines, and most of the time we wouldn’t sign our name, we’d say, “Guess who?” If I would send one to you, I would write your name and then I would say, “Guess who?” And what we did, we would put them underneath your door, or by your door, and we’d knock and run away. Whatever child was home inside that house was anxious, listening for the door or a knock on the door so that they can go get their valentine. It was fun… We would try to guess who it was, and that was all part of it trying to guess “Who was that one from?” And trying to catch someone trying to leave a valentine at your door to find out exactly who did it, that was fun too.”

“There were two stores: Churchill owned one, and Hibbs owned one. Two stores next door to each other. My mom always had an account. People had accounts at Hibbs’, and as they get paid - like my father got paid he’d pay so much on his account… They had bologna, tinned food, salt meat, and whatever, right? And of course, she [Mrs. Hibbs] would have her little book with my parents name on it, and she would write down everything that they put on their account. And then of course when they paid their bill, it would be marked paid. Then it would start again.”

ONE THE CAT MAN

“He lived down from me. He loved cats. Nat Pond was his name, that’s what we used to call him. He loved cats. One of my brother’s and a neighbour’s child went down there one day and drowned one his cats in his well. Oh, he was devastated… They were young, and you know them boys, up to their antics. So anyway, he came up to my parents and the parents next door, and of course my brother and my neighbour’s son were chastised, most definitely. There were cats everywhere. He loved cats. And he lived by himself – don’t know if he was ever married, he could have been, but when I was old enough to understand, he was on his own. And he loved cats, he just loved them.”

This interview was conducted as part of a Collective Memories Mug Up project conducted by Memorial University students enrolled in FOLK 6740: Public Folklore, Winter 2017. If you would like to listen to the full interview click here.