“I fished all these ponds, winter and summer" - Interview with Moses Tucker 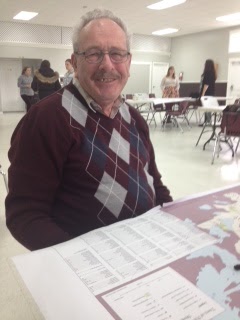 Born and raised in St. Philip’s, Moses Tucker is a staple member in the community of Portugal Cove. Following his first run as mayor in 1978, he spent 15 years working various positions on the City Council board. After some time away from politics due to other work responsibilities, Mr. Tucker was encouraged by members of the community to run for mayor a second time, which he gladly agreed to do. With deep roots going back several generations, Mr. Tucker carries with him a strong sense of dedication and loyalty for the people of Portugal Cove.

Mr. Tucker has a passion for waterways: he loves to know where water comes from and where it goes to. A retired civil engineering technologist, he is a local expert on ponds, lakes and rivers on the Avalon Peninsula. In 1968 he helped install one of the main water lines running along Portugal Cove Road, which is still used to this day. Mr. Tucker knows how the community’s drinking water is treated, which pond it comes from, and where it is flowing.

“Our water right here comes from Bay Bulls. All of Portugal Cove and St. Philip’s, Paradise and Conception Bay South, our water supply comes from Bay Bulls Big Pond which is on the way down Southern Shore. It’s great water, actually super water! This is a development that was a necessity because of the growth of St. John’s. Windsor Lake couldn’t supply all the water that was needed for the growth of the city.”

Mr. Tucker’s interest in lakes and ponds goes beyond the scope of drinking water; he knows where are all the best fishing spots. Good luck trying to get that information out of him! What he is openly willing to share, however, is how rainbow trout found its way in most of the ponds and rivers in the Portugal Cove community.

“I fished all these ponds, winter and summer. Some of these ponds have been actually seeded with rainbow trout that were brought in from Ontario back in the eighteen hundreds. Little tiny things, there are thousands out there. They’re aggressive too, they eat on local worms. But once you catch them, you put them in the boat, they die quickly. But the trouts that are native, what we call speckle trout, they don’t fight as much as the rainbow trout. But when you bring them into the boat, one can be there for up to an hour before he dies.”

Mr. Tucker carries with him countless memories of growing up and building his life on the Avalon Peninsula, from going to school, to skating in the winter, to swimming in the summer. In closing this interview he shares a memories from his first time serving as Mayor of Portugal Cove, when he was required to create a prayer:

“When you do incorporation you have to create a prayer. You have to write a prayer to the lieutenant governor in council, and that still exists to this day. In order to petition something from the Queen or the Queen’s representative, it has to be done in the form of a prayer. That was probably one of the most difficult things I’ve ever had to do, because I’ve been involved with the church and the church choir since I’m 15 years old. And one of the clergymen we had back then was a strict man as far as what you could and couldn’t do. Kids weren’t allowed to bow. Girls curtsied and boys had to salute. You could only bow to one, he said, to God. Now for me to create a prayer to somebody that wasn’t God, that was way beyond what I was taught. It was a struggle to do it. When it was explained to me that this is a format that has nothing to do with prayers and God, I said alright, I can do it.”

When asked about the future of the Portugal Cove community, Mayor Tucker is very optimistic that the town will maintain its rural character all thanks to one very important geographical element in this area:

“I think its going to maintain a lot of the rural character. We have so much coastline, and we have this wonderful thing called Windsor Lake which creates a marvelous buffer from the city of St. John’s. We’re 10 minutes from the biggest shopping center in Newfoundland Labrador — the Avalon Mall, but the city will not come in and build and occupy around Windsor Lake. That’s the watershed, that’s the water supply. That gives us the opportunity here to lay back, and take it easy!”