“It was better times, it was" - An interview with Diane Morris 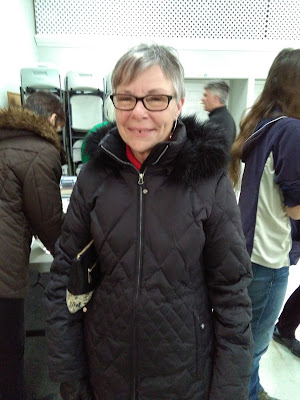 “We were planning on buying a house anyway, so we came down, went down to the gas bar down at the service station – I saw a picture of the house in the paper. So then we had a look. I wasn’t planning on buying it at the time, but we did… it was the first one we looked at, it was a good buy. It’s nice down here… it’s very quiet. You are close to everything, the scenery is nice. You have a perfect view of Bell Island… And the neighbours… it is nice here.”

In addition to the tight-knit community, quiet atmosphere, and beautiful scenery, Diane enjoys the opportunities that Portugal Cove-St. Philip’s has for her to fulfill her more athletic inclinations. She is an avid hiker, and enjoys taking to the local trails around Portugal Cove-St. Philip’s with her hiking group. Diane’s favourite trails are located around an area known as Rainbow Gully, where she hikes and snowshoes fairly regularly:

“There’s a lovely hike out in Bay Roberts, but I like them all actually, because we do different ones. We do a bunch around here… we did some of the East Coast Trail as well, right? But the one over behind here [Rainbow Gully], that’s a really nice trail. It’s not one I would do on my own because I think I would get lost, because of the different, you know, little, different off-shoots from that.”

“They come from everywhere, but the two people that set [the hiking group] up were from St. Philip’s. I got involved because they had a meeting over here regarding it. I guess it has been going on for five or six years or more now, but as time went by people came from everywhere – you know, St. John’s, some from the cove, some from CBS – wherever… everybody’s welcome. It’s a great time. We started off with five or six people there every Saturday, and now you might get twenty five or thirty… And then sometimes we go to somebody’s house for a bit of coffee and a little snack after – not every one, but we do that sometimes, which is kind of nice.”

Diane also spent several years rowing in Regatta boating competitions – a style of fixed-seat rowing in which a coxswain steers a boat and a team of rowers on an established racing course. Though she primarily participated in Regatta rowing in St. John’s, Diane also talked a little bit about the Regatta competition held annually in Portugal Cove.

“It was better times, it was – I think it was, when I was growing up. It was not as hectic, you know? And stuff like that. It was good.”

“[We would play] Cowboys and Indians, we used to play that. We used to play baseball and softball. We’d swim and we’d skate. We’d have a dance party at the school, something like that, we’d go to that. And we’d meet our friends at a little restaurant, something like that. When the weather was good, we were always outdoors… we used to slide in the winter time. It was enjoyable.”

“We would play hopscotch, and jumping rope… We were always busy. We were never bored, I can say that.”

In wrapping up our interview, Terra asked Diane if there was anything someone who had never visited Portugal Cove-St. Philip’s should know. Diane reiterated all her favourite parts of living in Portugal Cove, and concluded her statement with this:

“I have no plans on moving anytime soon – my age will probably force me later on, but I like it here. My husband likes it here too… It’s just a nice community, you know? It’s very nice, it’s very quiet. I think if anybody, you know, who didn’t live here and came here to live, I think they would enjoy it. It’s nice. I didn’t know where we would have bought a house when we bought it, we just happened to see it down here. It’s close to everything… it’s a nice place.”

This interview was conducted as part of a Collective Memories Mug Up project conducted by Memorial University students enrolled in FOLK 6740: Public Folklore, Winter 2017.
Posted by Dale Jarvis at 8:30 AM