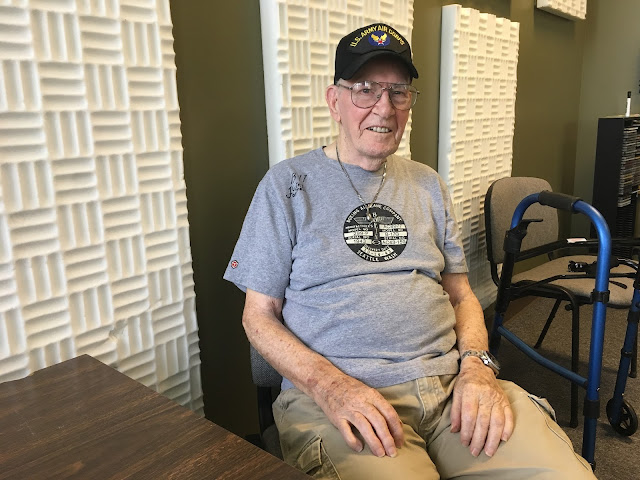 Earlier this year, I had the good fortune to be the folklorist-in-residence for the Friendly Invasion 2016, a commemoration of the 50th anniversary of the closing of Harmon Air Force Base in Stephenville.

Over a few days, I conducted a pile of oral history interviews, most of which you can listen to here. I met a lot of people over those few short days, but one of the gentlemen who stood out was John F. Young, who was born in 1927. He was one of those many Americans who had come up to Newfoundland and lived and worked at Harmon AFB.

John was one of our participants in the incredibly successful "Sharing the Memories – stories of Harmon AFB" event we held at the Can-Am Lodge. John told stories about coming to Harmon in those early years, and his humour was one of the highlights of the evening.  I've blogged about that event before, where you can listen to the full recording of the event.

I was able to sit down with John and do a longer one-on-one oral history interview with him. Over the course of an hour, we talked about his early life, coming to Stephenville, meeting his wife in Newfoundland, his work with the weather service, the Cuban missile crisis, and his love for hunting and fishing in Newfoundland.

That entire interview has been placed online on Memorial University's Digital Archives Initiative, and if you have an hour, give it a listen or download the mp3 here.

Over the past few months, his daughter Tracy has been giving me updates on John's condition. He hadn't been well at the time of our interview, but his doctor had given him clearance to make one final trip to Newfoundland. Tracy wrote that she had been inspired by our oral history work to do some of her own, and had been getting John to tell her some of his stories.

I got a text from Tracy Saturday night to tell me that John had passed away. I only met him a couple times over that week in Stephenville this summer, but he stands out in my memory of that celebration. I was honoured to have spent some time with him and to have been given the chance to record some of his stories.

A memorial and Military Honors ceremony will be held on December 10, 2016, at 2:00pm in Valdosta, Georgia.  You can read John's obituary here, or if you enjoyed listening to his tales, you can make a donation to the National Audubon Society or the Disabled American Veterans Association in his memory.

Thanks for the stories and the laughs, John.