The Ghost of the White Elephant, Makkovik. #ShareNunatsiavut 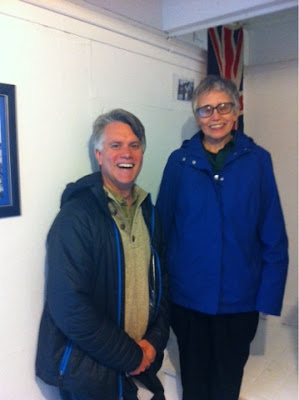 I'm currently fogged in, in Makkovik, where I just overheard a man at the hotel say, "Man, the fog is thicker than day-old pea soup!" He isn't wrong, but the fact I'm likely to be stuck here for a few more days is actually just fine! I'm here for the annual Nunatsiavut Heritage Forum, the first time I have been to the forum for several years. I always love it when I get a chance to come to Labrador, and I was delighted to be invited to come talk about intangible cultural heritage and oral history.

I was doubly delighted to come to Makkovik. I've been to a few places in Labrador over the past 21 years, but this was my first trip to Makkovik.  It is a town I've always wanted visit, and I got a great tour today of the White Elephant Museum, which has been a highlight of the trip for me so far.

The White Elephant is a building which was constructed by the Moravian Church in the early part of the twentieth century. The building was used for many purposes over the years. It served as a boarding school, nursing home, and as a clinic. In 1959, about 30 families were resettled in Makkovik from Hebron.

The carpenters involved in the resettlement project were Newfoundlanders, brought in to build new houses. They lodged in the White Elephant. The same year, it also served as the residence for the first full-time nurse. Since it was rarely used for its original purpose but still required maintenance, the building was often referred to as the "White Elephant." The name stuck, and remains to this day.

Back in December 2000, the White Elephant was officially designated a Registered Heritage Structure by the Heritage Foundation of Newfoundland and Labrador, and the community began the work of restoring the building back to its original condition. Today it houses over 200 artifacts, including fishing and hunting gear, old photos, kitchen utensils, tools, family Bibles, traditional clothing, mission diaries, and much more. I was the registrar for historic places at the Heritage Foundation when the building was designated, an although I've known of the place for 16 years, today was the first day I got to step inside, with Joan Andersen as guide.

Joan is one of the Heritage Foundation of NL's board members, and has been one of the key people involved with the White Elephant Museum Committee for decades.  She is also the one who first told me about the building's resident ghost.  I went back through my files today, and dug up my old notes on the White Elephant's ghost story, and will share some of them here.

The ghost of the White Elephant is a somewhat shy creature, and has never actually been seen. The origins of the spook are also a bit of a mystery, but stories about the ghost have circulated for well over 30 years. In the 1960s the building served as a teachers’ residence, until a new teachers’ home was constructed in 1971. While no one is certain exactly when the ghost arrived, by that point the spirit was already a firm part of the local folklore.
Joan was one of the teachers who stayed in the building. Even though she lived there, she did not meet the ghost personally.  When I interviewed her years ago for an article on the ghost, she told me, “I used to live there when it was a teachers’ residence, and never blinked an eye. But other people who have lived in there said ‘oh yeah we could hear footsteps on the stairs’ and things like that.”

Teachers living in the building in the 1970s heard ghostly goings-on from time to time. They would be in the kitchen or living room, and hear someone come in and go up the stairs. They would go upstairs to see if there was anyone there, and there was never anyone to be seen. No one ever caught sight of the mysterious visitor. All that was heard was the sound of someone going up the stairs.

“I asked some of the older people and they said they think it was because the building was left dark, especially in the time when there were no street lights around, and it was empty a lot of the time,” Joan told me in that old interview.

“The people, especially kids, didn’t like to go by it. And you know how stories get told, and kids think it is haunted.”
There is one theory on where the ghost story may have come from. In the years before Confederation, the Moravian Church missionaries played the roles of ministers, traders, social workers, and medical personnel. “They would give you salves, give you the occasional needle, pull teeth and whatnot, deliver babies,” Joan told me.

In the 1930s or 1940s one of the missionaries attempted an emergency surgery. The operation failed and a teenage girl died in the building. Could this be the source of the rumour that the White Elephant is haunted?

In 2002 the museum started off their summer season with a student who quickly realized that she could not work in a haunted building. As Joan told me, “there was just one student working down there at a time, and I guess she just could not stand the quiet and stillness and the talk of ghosts that she had heard... and so she only lasted a week!”

Today, I got to meet that same former employee, who was participating in the heritage forum. I met her in the museum, so she must have gotten over her initial fear of the ghost!

The White Elephant Museum is open to tourists from July to August, or by appointment. If you visit, listen carefully. If you hear the front door open, and the sounds of footsteps climbing the stairs, you might be in the presence of Makkovik’s famous ghost. 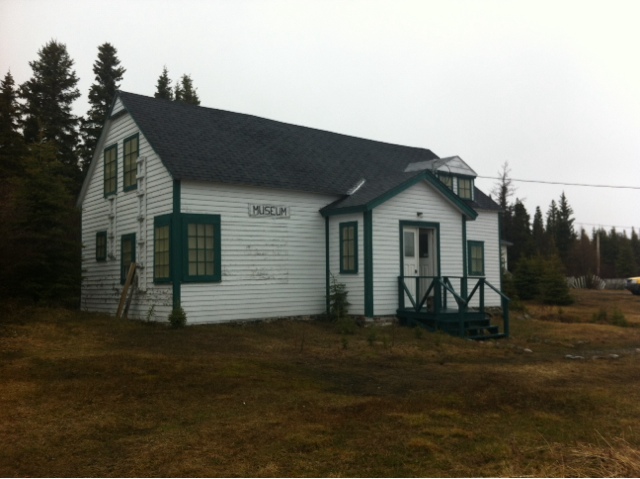