We asked for your favourite mustard pickle recipes. Look what we got! 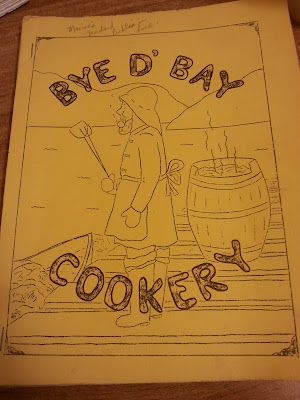 We put out a call over the weekend for your favourite mustard pickle recipes, and a couple people responded immediately! If you have a recipe you want to share, you can email us your version at mustardpickles@heritagefoundation.ca.

One of the delights of recipes, as any cook will agree, is the story that often accompanies the recipe. The first two recipes emailed in were no exception!

The first recipe I received was from Elizabeth Winter, who writes, “Have not made this for years since I am now 88, but found it in my old tattered files. I now buy my pickles from Belbin’s or Jocelyn in The Square. There was a similar recipe in the Spencer Club Cook Book but we were Prince of Wales girls in the fifties sharing our mothers’ recipes.” Here is Elizabeth’s recipe:

Cut up veggies and soak in brine of 1/2 cup of salt (pickling salt if possible) in water to cover over night.
Drain and rinse.
Add 2 1/2 pounds of sugar to 1 quart less 1 cup of vinegar. Boil 20 minutes
Make a paste of 1 cup of flour mixed with 2 tablespoons of mustard powder and 1 1/2 teaspoon turmeric and 1 cup of vinegar.
Boil 10 min.


Our second mustard pickle recipe comes from Marian Dawe, who says “I've made these for years now and people always want them again… Around 15 years ago, I found this in a ‘Bye D'Bay Cookery" recipe book that I had in my collection. The book itself has no date on it and I am thinking it was sold sometime in the late ‘70s or ‘80s. The forward says the recipes were collected by members of Micron Chapter, Beta Sigma Phi whose members live along the shore of CBS. They were fundraising for community projects.” The recipe is attributed to Brenda Skinner. Here is the recipe, with Marian’s notes:

Place the above in pot, bring to a low boil, and simmer slowly for 1/2 hour.

Mix the flour, mustard and turmeric with about 1/4 cup of cold water to make a paste. Add to the vegetables and stir to combine. Simmer slowly for 3/4 hour. Bottle right away.


And one more recipe! Food blogger Liz Feltham has shared a classic recipe from her late late mother-in-law’s copy of The Treasury of Newfoundland Dishes on her blog here.
Posted by Dale Jarvis at 8:28 AM

The worst part of Elizabeths' recipe is getting the skins off the pearl onions...if any can be found !