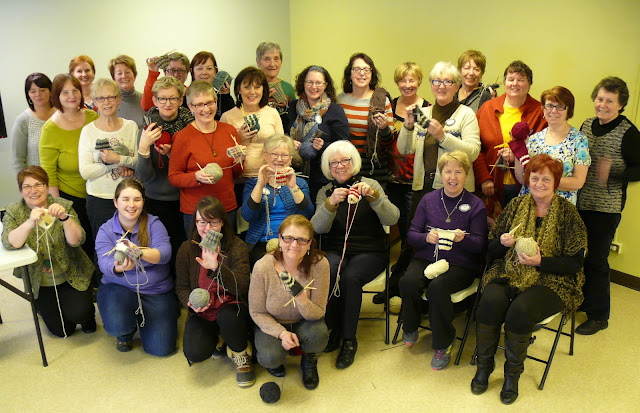 On Saturday March 5th, despite the weather, we had around 45 lovely knitters join Christine LeGrow and Shirley Scott for an afternoon of knitting. Participants knitted traditional Newfoundland socks found in Operation Homespun which is produced by the Anna Templeton Centre and is available for purchase! 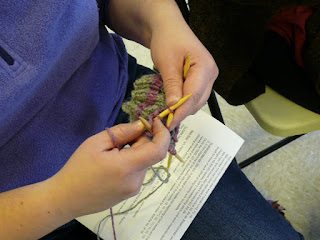 While participants were ribbing k2, p2, Christine read poems and excerpts from A Pair of Grey Socks: facts and fancies by Tryphena Soper Duley; Verses by Margaret Duley. The book was written in 1916 and was a perfect way to connect the knit-along with the 100th anniversary of the First World War. "A woman is knitting most all the day, a sock that shapes from a ball of grey, her fingers fly, and the needles click, fast grows the sock so soft an thick..." In the poem, white stripes on the grey sock "marks the socks for the slender youth who does his part for the cause of truth. The red is a sign for the hardy man, at the height of his strength in life's short span... blue in the sock is the medium size, the colour dear to sailors' wives. So in the grey socks red, white and blue form our colours so bright and true..."

Shirley Scott told us about the research she did for Canada Knits: Comfort in a Northern Land. The favourite story of the afternoon was Queen Elizabeth I encouraging the knitting industry. Shirley said after Queen Elizabeth I received her first pair of silk knitted socks she stated, "... indeed I like silk stockings so well, because they are so pleasant, fine and delicate, that henceforth I will wear no more cloth stockings." 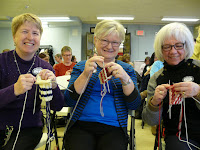 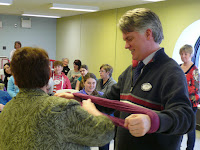 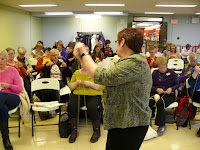 After the ribbing of the sock, it was time for the leg of the sock which is composed by a simple stockinette stitch. Shirley and Christine showed examples of mistakes that can be made when knitting a sock. For example, the ribbing being too tight to fit your foot in or the foot of the sock being too big causing it to fold in your shoe! 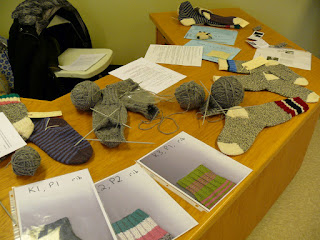 Laughs were had and knowledge was shared! I had an e-mail from a participant saying she felt lost at the beginning but a wonderful lady next to her was extremely helpful and she has been working on her sock since. We also had someone text a photo to Christine who was knitting the pattern in Quebec at the same we were here in St. John's. We hoped the knit-along would do exactly this.

This Saturday is the last session! Christine and Shirley will be showing participants how to turn the heel and graft the toe. If you missed last week and are interested in coming this Saturday, send me an e-mail so I can send you the pattern for you to catch up -- stephanie@heritagefoundation.ca.

Posted by Stephanie Micikyan at 8:30 AM

As a proud Newfoundlander living in Québec City, I took part in this Knit-long. While I have finished the socks, which will be given to my son, I plan to do some more. I have a copy of the book, which I got many, many years ago, and this sock is the one which my son (in the Navy) really likes.
Thanks to Christine and the other people for organizing this.