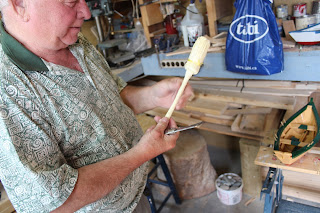 Today’s Tuesday Folklore photos are of Mr. Joshua Young demonstrating how to “run” a birch broom. Last Thursday afternoon after a successful first interview for the radio show/podcast Living Heritage with Christine Legrow, Dale and I took a trip to Mount Pearl to talk with a gentleman who grew up in Grey River on the South-West Coast of Newfoundland near Burgeo. Mr. Young learned how to make birch brooms from his family members and continues to teach his grandchildren how to make the brooms today. 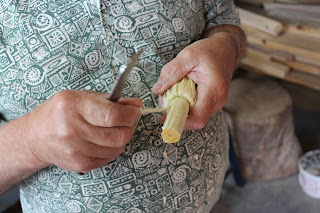 Mr. Young explained the different between white and red birch trees and how to find the right piece of wood to carve into a broom. While explaining and discussing broom making Mr. Young made a small birch broom in under an hour as a simple example of how to make a birch broom. He sent us back to the office with the sample he made as well as one of his larger brooms which he wasn’t completely satisfied with due to the crook in the handle. The broom now hangs on the wall in our office and is the first thing you see when you step inside. 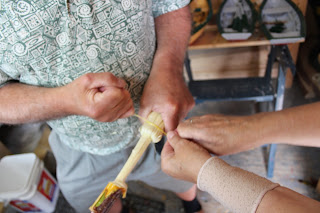 Mr. Young also makes model wooden boats and explained his process of crafting and painting these as well. It was an excellent afternoon and I hope I am able to join Dale when he goes back in August for a more hands on demonstration of broom making.

I have made a few of these and know the work involved in making them. Beautiful work and a great craft. Well done sir.