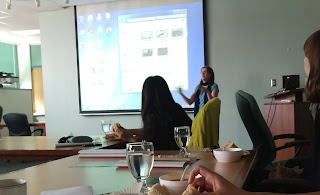 I spent Monday morning attending the Association of Newfoundland and Labrador Archives' annual general meeting and today's folklore photo was one I snapped quickly during yesterday's meeting.  I was invited as a representative from the ICH Office as ANLA and the Heritage Foundation are partners and sister heritage organizations.

It was interesting to learn a little more about the organization and to hear some of the triumphs and challenges the organization has achieved and overcome in the past year and where they want to take the organization in the coming year.  One thing which ANLA has been promoting recently are their online webinars so be sure to check out their website for upcoming workshops!

The picture above is from the presentation which occurred during the lunchbreak.  Jenny Higgins from the Newfoundland and Labrador Heritage Website introduced a series of short films which she has been working on recently.  The videos were on difficult subjects and were incredibly moving.  One touched on the 1914 sealing disaster, another on the great fire of 1892 and the last on the battle of Beaumont Hamel.  Check out some of the videos on their website and stay tuned for more.