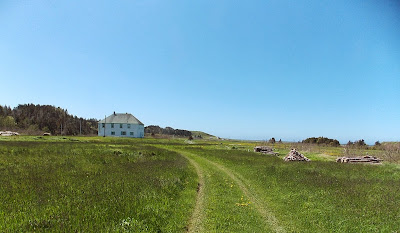 This past June I had the pleasure of speaking with Mrs. Freda Gillis of St. Fintan’s in Bay St. George. Our chat was the end result of research into the Legge Homestead in Cartyville, which was designated a Registered Heritage Structure on April 26, 2013. On one of my work related road trips several years ago I had come across this house. Surrounded by wild, overgrown meadows, it lay at the end of a path beaten through tall grass. It looked unlived in. It looked as if it belonged in another time and place. Over the years I had often thought about this seemingly out of place house and the lives that might have been lived within it.

The designation application for the property reported that it was built in the early 1900s - strange considering its style, which is similar to an English country cottage. Similar examples of this style in the province are much older. It also named Richard Cook as the builder. A Google search led me to genealogy forum by a Stephen Gillis. Turns out Richard Cook was his great grandfather, and Richard’s daughter, 102 year old Freda, was living in St. Fintan’s, Bay St. George and was reportedly a great storyteller.

Mrs. Gillis was a wealth of information. She told me how her father, born in Newfoundland in 1873 to English-born parents, was sent to England to be educated when he was 11 years old. He returned to Newfoundland in 1903 and built the Legge Homestead shortly after. She also helped solve the mystery of how this house reminiscent of much older style was constructed in Cartyville in the first decade of the 1900s.

Mrs. Gillis turned out to be a great storyteller indeed. She is celebrating her 103rd birthday today, December 5th. A full article based on my conversation with Mrs. Gillis will appear in the December ICH newsletter.
Posted by Dale Jarvis at 9:55 AM

Thank you for that info. I often wondered about that property.