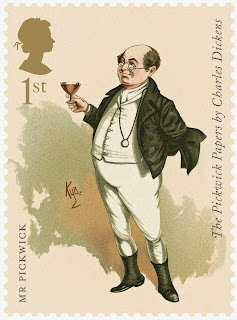 The traditional mummers play "Soldiers acting at Christmas" was part of the folk traditions of Change Islands, Newfoundland, and dates to circa 1900. It is a hero combat play, where King George fights the King of Egypt, with a death and revival typical of other mummers plays in Newfoundland, UK and elsewhere.

Towards the end of the Change Islands play, there is a procession of stock characters, one of whom is Pickedy Wick, who enters and states:


Here comes I, Pickedy Wick,
put my hand in my pocket and pay what I thinks fit;
Ladies and gentlemen, sit down to their ease,
Put their hands in their pockets and pay what they please,
And if you don't believe those words I say,
step in Beelzebub and boldly clear thy way.

This year, we've been working with Julia Halfyard and Tim Matson with the MAX theatre program in St. John's. Tim has adapted and updated the mummers play, which the MAX theatre students will perform in December.

One of our brave band of mummers, Caitlin Harte, asked last week about who the character of Pickedy Wick is supposed represent. A fair enough question, really, as many of the characters in the traditional mummers plays are foreign to young audiences today.

I suspect the character is based on the figure of Samuel Pickwick, the hero of the Pickwick Papers, by Charles Dickens. Here is a quote to describe him:


He is a simple-minded, benevolent old gentleman, who wears spectacles, breeches, and short black gaiters, has a bald head, and 'good round belly.'

My thought is that he is in the play to represent the idea of good times, good friends, good food and good cheer - a jolly fellow, perfect for Christmas.

You can come see Pickedy Wick, King George, the Villainous Knight, the Doctor, and all their friends as the MAX theatre students perform their version of the old mummers play as part of the Mummers Festival, at The Rooms, on Sunday, December 8th.
Posted by Dale Jarvis at 3:51 PM