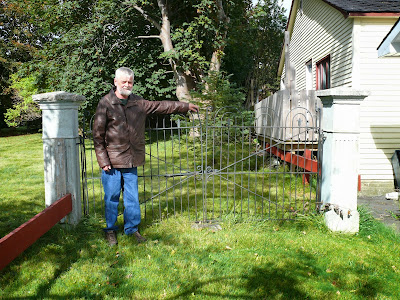 The ICH office is currently working with the Bay Roberts Cultural Foundation on a project to record local stories. While the focus is on stories and memories concerning folk belief, traditional cures and charms, and superstitions, we are also recording some general oral histories with locals.

Last Friday, I sat down with local historian and author Mike Flynn to talk about the Bay Roberts of yesteryear. Mike had lots of stories, including some great bits of local folklore, including legends about the Devil and buried treasure.

We also had a chat about janneying (mummering) in the region, and in particular, about the murder of Isaac Mercer by mummers in December 1860. You can read a bit more about that case here.

After we talked, Mike took me to see an old wrought-iron gate, the location where the murder took place a century and a half ago. It is near a spot once known as Wilcox's Lane, a now mostly-forgotten laneway that today is on private property. It is a spot I've driven past hundreds of times, but which I'd never explored. It is a good example of the history that is right under our noses, and often overlooked. So here it is, in the photo above, the gate to the former Wilcox's Lane, with Mike Flynn standing guard.

The interview with Mike will eventually be up on Memorial University's Digital Archives Initiative, as part of our ICH inventory, in the Bay Roberts collection. Stay tuned!
Posted by Dale Jarvis at 2:05 PM