On a fabulously sunny 16th of July, I travelled to Bristol’s Hope to meet with members of the heritage committee who are currently working on the restoration of the historic Mosquito Schoolhouse.

One of the last of its kind in Newfoundland, the building is a rare example of what wooden schools in outport communities looked like in the 1800s. A local minister by the name of Kingwell built the school, possibly between 1818 and 1828, to serve the needs of the 360 people inhabiting Mosquito, as Bristol’s Hope was then called. In June 1988 the building was recognized as a Registered Heritage Structure by the Heritage Foundation of Newfoundland and Labrador

We started at the school, where I met with Richard Johnson, Don Skinner and Cal Penney, who are all involved in different facets of the project. Richard gave me a tour of the building, and brought me up to date on the ongoing restoration work. Over the rest of the building season, work will continue on corner boards, clapboard, installing proper heritage windows, and replacing the wood shingle roof. One of the interesting interior features that the committee plans on restoring is an old cast iron kerosene lantern chandelier, which can be raised and lowered to light or extinguish. 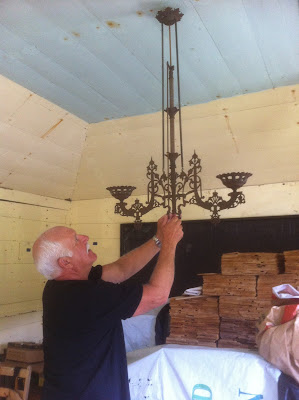 After the tour, we all went back to Richard’s house, where we discussed plans to embark on an oral history project centred around the school. While the building has not been used as a school for some time, there are still people in the community, and those who have moved away, who remember going to school in the building, and who have stories and memories of teachers, classmates and pastimes.

As I said to the gentlemen of Bristol's Hope, it is a great project, as it is one where we can clearly show the link between the two facets of the work we do here at the Heritage Foundation: the conservation of historic structures, and the safeguarding and documentation of traditional knowledge. I'm looking forward to helping with the project as it unfolds.

As a first step, the committee is working to compile a list of possible people to interview. If you have a memory of the old Mosquito School, I’m sure the organizers would be interested in hearing about it! You can email me with your contact information at ich@heritagefoundation.ca.