Exploring Our Roots: A Heritage Inventory of Newfoundland’s Root Cellars 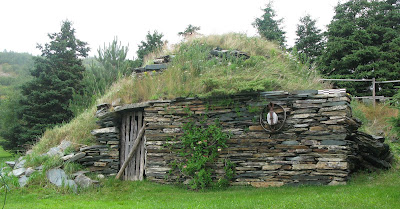 In 2011, the Heritage Foundation of Newfoundland and Labrador (HFNL) hosted the agricultural-themed folklife festival, Seeds to Supper, to celebrate farming and gardening traditions in the province. To complement these celebrations, an architectural inventory of over 150 root cellars was conducted and has been added to Memorial University’s Digital Archives Initiative (DAI).

The research was conducted by Crystal Braye, hired through MUN’s Division of Co-operative Education, in collaboration with Julie Pomeroy of the Agricultural History Society (AHS),

Crystal has recently completed a report on her root cellar work with HFNL, and we are pleased to release it as the third in our Occasional Paper on Intangible Cultural Heritage series. If you have an interest in root cellars, folk architecture, or traditional knowledge, give it a read!

Download Occasional Paper 003 as a pdf
Posted by Dale Jarvis at 12:18 PM