Swastikas and Star of David in vintage Newfoundland ad 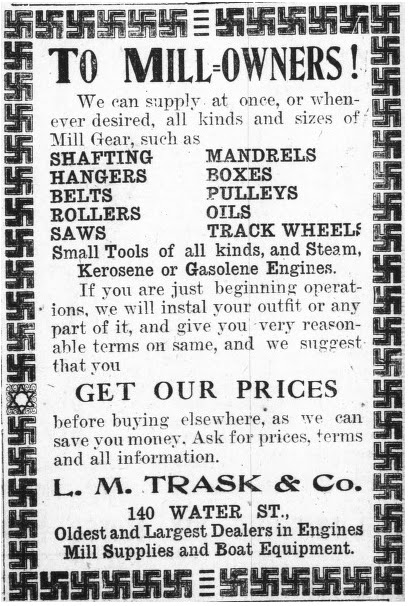 One of the great resources for historical and cultural research we have here in Newfoundland and Labrador is Memorial University's Digital Archives Initiative (DAI). For several years now, the Intangible Cultural Heritage (ICH) Office has been adding to the ICH Inventory on the DAI, building collections on things as varied as Newfoundlanders working high steel, to concerts and times, to bonfire night.

In addition to the ethnographic material we've been adding to the DAI, the initiative also houses a large amount of digitized newspapers, which is a fantastic resource to anyone doing Newfoundland-based research.

While looking for something completely unrelated, I happened across this intriguing advertisement for L.M Trask and Company on Water Street in St. John's, the "Oldest and Largest Dealers in Engines Mill Supplies and Boat Equipment."

The advertisement ran in the St. John's Daily Star of 3 March, 1920. And while it is interesting for what it is selling in terms of mill equipment of the day, what is more eye-catching to the modern reader is the printer's use of swastikas (and one lonely star of David) as a border.

For those of us who grew up post-World War II, the swastika is an immediate reminder of Nazi Germany. But before that, the swastika had a long and honourable tradition, and was a symbol of the sun, life, luck, eternity and various other concepts for a wide variety of cultures throughout Asia, Europe and indigenous North America. In the early twentieth century, when the Daily Star ran its ad, the swastika was a not uncommon symbol in North America, and was used in a wide variety of logos, advertisements and printing applications.

In March 1920, I doubt that L.M. Trask and Co. knew that, across the Atlantic, a fledgling National Socialist German Workers' Party would adopt the Hakenkreuz (hook-cross) as its official symbol the same year.