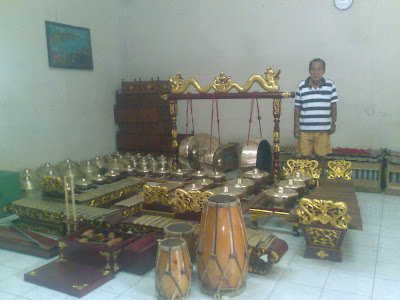 By Mandy Cook
Memorial’s School of Music will unveil the latest addition to its suite of instruments at a special event at the St. John’s Arts and Culture Centre.

Music lovers will be treated to the debut concert of the school’s new gamelan and a special naming ceremony for the set of Indonesian instruments on Thursday, March 21, from 4-5 p.m. on the centre’s upper concourse. The gamelan will be housed in the school’s Research Centre for the Study of Music, Media and Place, located in the Arts and Culture Centre.

It is Indonesian tradition to give a new gamelan its own special name through a ceremony called a selametan (“thanksgiving”). The ceremony involves sacred songs and special offerings of food (especially nasi Tumpeng – rice with saffron, drinks, fruits, and incense. Master gamelan artist Ade Suparman, who hails from West Java, will lead the ceremony and perform with gamelan expert and Evergreen State College instructor Dr. Sean Williams. Mr. Suparman is a specialist on kecapi (a stringed zither), and Dr. Williams is a suling (flute) player and vocalist.

The event will also be the debut of the MUN Gamelan Ensemble under director Bill Brennan, who is also a member of the Toronto-based Evergreen Club Gamelan. The student ensemble has been working together since January and has benefited from recent workshops with Mr. Suparman.

“The School of Music has been the recipient of a generous donation from the estate of Rita Love that has enabled us to complete our prestige string quartet, to establish a student scholarship and to commission an Indonesian gamelan degung,” said Dr. Ellen Waterman, dean, School of Music. “We are grateful to Derrick Hutchens, the executor of the Love estate, for his work in realizing these projects.”

A gamelan is a set of keyed metallaphones, similar to xylophones, and gongs found in Indonesian classical music. The various instruments are all made to order by a master artisan and are meant to be used together only in that particular gamelan. The School of Music’s gamelan was crafted by 75-year-old Tentrem Sarwanto, a renowned Javanese gongsmith who has supplied gamelans to several major universities in Europe and North America.

There are several different varieties of gamelan -- Javanese, Balinese, Sundanese – depending on what part of Indonesia they come from. Sundanese gamelan, or gamelan degung, the gamelan the School of Music has chosen, also includes double-headed drums, a bamboo flute (suling) and a zither (kecapi).

Gamelan is particularly useful as the in-house world music ensemble at the School of Music, says Dr. Waterman, because it is a rhythm-based group activity that doesn’t rely on particular instrumental skills in order to play – any good musician can become proficient. She says it is “beautiful looking and sounding,” and is a common instrument that an ethnomusicologist might be expected to teach in a university program, and therefore a highly valuable experience to have.

Dr. Waterman says the ensemble will provide a highly visible “anchor” ensemble in world music for the ethnomusicology aspect of the School of Music’s undergraduate and graduate programming. As well, Acadia University in Wolfville, N.S., has a Sundanese gamelan, which will provide collaboration opportunities between Acadia and Memorial.


Photo: gamelan with its maker, Tentrem Sarwanto
Posted by Dale Jarvis at 11:32 AM