The Arnold's Cove Water Truck, circa 1970 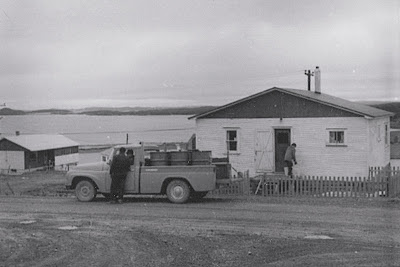 I mentioned in an earlier blog entry that we've been working with some local heritage enthusiasts in Arnold's Cove on a project to map out the legacy of resettlement in that community. We'll be running some community training over the next little bit, showing people how to create a Google map of some of their photos and stories.

The area of interest in Arnold's Cove contains over 70 buildings which were floated into the community during the resettlement period. The local heritage committee has located most of these on a paper map, and we'll be showing them how to transfer some of their collected information into a digital format which they can share online.

I drove out to Arnold's Cove this morning to plan out our workshop, and local volunteer Edna Penney showed me some of their historic material on the theme of resettlement.

The photo above is one of hundreds they've amassed. It was taken around March 1970, and shows one of the houses which was brought into Arnold's Cove. When the houses first arrived, many of them were not yet hooked up to town water, so the town had a water truck (pictured above) which delivered water to those dwellings.

If you have a memory of the Arnold's Cove water truck, or know any of the people in the photo, you can email me (Dale Jarvis) at ich@heritagefoundation.ca

the house looks so familiar,looks like a house i may have visited as a child