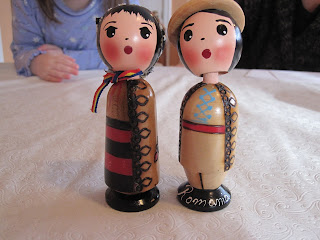 
On a recent interview, which is part of ICH’s project on Eastern Europeans from the former Soviet bloc, I happened to come across a pair of Romanian bobble head dolls. The dolls, consisting of a girl and a boy, were purchased by Teodora Koronka for her 3-4 year old daughter during a recent trip to Romania. Teodora stated that she had purchased them at a shop in a local village that is owned by an older woman who creates works of art or objects based on the traditional art style of Romania. The clothes of the dolls are reflective of traditional Romanian dress and are produced using  paint and wood burning techniques.

The basic model for traditional Romanian dress is a white chemise which is typically made out of hemp, wool, or some other form of woven material. For women, the chemise is generally long enough to reach the ankle, while for men it is shorter and worn with pants or leggings. Women will always wear an apron, made up of one or two pieces of fabric, tied with a cloth belt at the waist. For men the clothing is made up of a white shirt (cămasă), white trousers, hat, belt (wider than a woman’s), waistcoat and or overcoat. 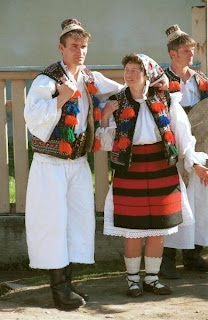 Local differences are marked by shirt length, type of embroidery, trouser cut, hat shape, or waistcoat decoration. The style depicted on these dolls is found in Maramures, located in the northern part of Romania. Aprons from this area are made of a rectangular piece of cloth often called Striped apron (‘Catrinţă or zadie’). They are usually worn in pairs, one in the front and one in the back and the wool is woven with horizontal red and black stripes. Straw hats in the maramures traditional style called clop, pl. clopuri, are very small, when compared to other areas. 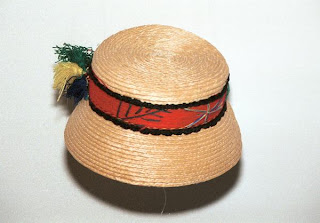 These particular dolls have a interesting feature: when brought together, magnets located in the heads allow the dolls to “kiss.” 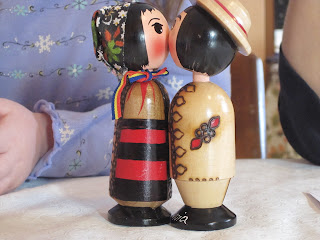 That kissing dolls are really amazing. The magnetic effect really so creative to make them kiss. Very creative one. Thanks for sharing.