Mapping the legacy of resettlement in Arnold's Cove, Newfoundland 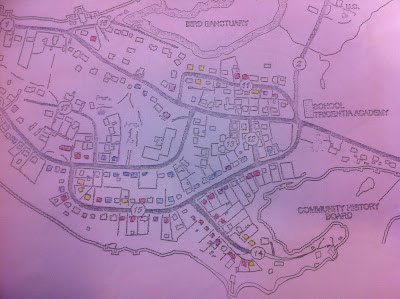 "Overall, some 307 communities were abandoned between 1946 and 1975, and over 28,000 people relocated. Captured in film, poetry, visual art and music, the response to resettlement was an important political thread in the province's cultural renaissance in the 1970s. The programme had a profound impact on the lives of those affected, and continues to resonate in the culture and collective psyche of the province today."

I had an interesting day today, with a trip out to Arnold's Cove to meet with representatives of the town's heritage committee. I was there to help provide some advice on project focus and preliminary project planning around a few ideas they have for future heritage projects.

I'm always encouraging communities to focus on projects that are somehow unique to their communities. One of the interesting facts that came out of today's meeting is that the town has a large number of buildings that were moved into the community from now abandoned Placentia Bay towns during the resettlement period.  A lot of communities in the province have resettled buildings, but the heritage committee has tentatively identified 71 houses still standing in Arnold's Cove, with a few additional buildings yet to be added to the list.  They are clustered, perhaps unsurprisingly, with people from the same home towns, with people setting up their houses in Arnold's Cove close to their original neighbours. You can see a rough version of a preliminary map above.

We are talking about setting up a public workshop in Arnold's Cove around the topic of mapping cultural resources, using this as a case study, and possibly incorporating features from of one of our old Google map workshops. Stay tuned! If you'd like to be involved in some way, you can drop me a line at ich@heritagefoundation.ca